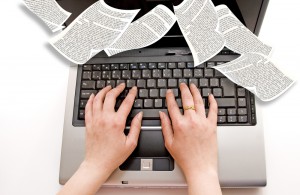 1990s: As a reader, you had probably never heard the word blog (web log) unless you were an IT techie. Then, your only source for book reviews was the media, who solely published reviews written by professional book reviewers. The result:

2000–2005: Right at the turn of the millennium, developers launched blogging platforms, like Blogger, aimed at regular people, and within five years blogs were gaining interest and credibility, and the role of the book blogger was created. Initially, readers used blogs focused on books simply as a means to journal their reading experiences and to recommend books those friends following their blogs may enjoy. But then the first authors connected to the first book bloggers; the first review requests were made and accepted; the first targeted reviews were created. A quiet revolution had begun, and it gained momentum until…

2005–to date: A community formed! It went something like this.

At the same time, self-publishing had come onto the scene, and by 2008, for the first time in history, more books were independently published than traditionally. In 2009, more than three quarters of all books released were self-published, and publishing houses began to decrease the number of books they published. Independent bloggers and independent authors found a natural affinity, and some of the first self-publishing sensations to hit the headlines owed their success in large measure to the support of the book bloggers; Amanda Hocking, for example, who was averaging 9,000 sales of her self-publishing books per day in 2011 on Amazon, was very open about the bloggers who had supported her. Book bloggers were suddenly famous: a known entity. And it was abundantly clear that as a group they wielded a great deal of power.

It’s a friendly community, I find, in the main. Not snobby or needlessly critical, but open and loyal. We’re intelligent and thoughtful readers, and we’re well-read. And the best of us are respectful and supportive of authors. Because above all else, we love books, love books, and what a wonderful development in technology that has brought us to a place where we can make a difference in the world of publishing.

I have become a book blogger and it is incredibly hard work, especially getting recognized by Google as an authority so that they will actually return your blog posts in their search results. It can be disheartening when so much time an effort is invested in a blog post only to have it ignored, but that is the way of the Internet, traffic ahs to be earned. The good news is that you are never defeated until you give up and if you continue to create or share great content then eventually you will be found and it doesn’t always… Read more »