Hieroglyphs ­– pictures to represent letters, sounds, objects and ideas ­­– are one of the most enduring legacies of Ancient Egypt. 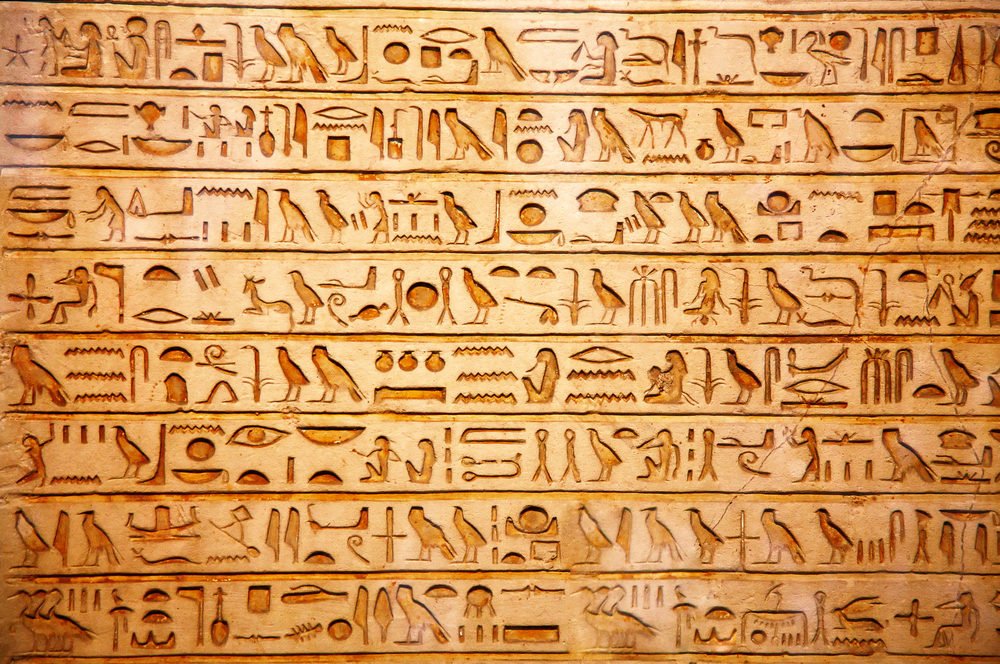 The earliest-known Egyptian hieroglyphs date back to 3100 BC, and the last-known hieroglyphic inscription was at the Temple of Philae in AD 394. The hieroglyphs, inscribed in tombs and temples, were the province of the educated, like the royals and nobles and the priests. (The hieratic and Demotic scripts were developed for everyday handwriting.) Most of the scripts in use today can be traced back to Egyptian hieroglyphics, including the Latin and Cyrillic and Arabic scripts.

During the Middle Kingdom, there were more than 700 hieroglyphic characters, and by the Ptolemaic period, this had grown to 1,000.

We have Jean-François Champollion to thank for our ability to interpret hieroglyphs: when he decoded the Rosetta Stone in 1822, he unlocked the key to this ancient language.

The writing system was more sophisticated than just pictures; it was a language with tenses, verbs, nouns and prepositions. Each glyph (picture) had a purpose, either to:

Hieroglyphs can be read from top of bottom, and also from left to right and right to left. There’s a simple way to work out which way to read: whichever way the animals in the script are facing, read that way.

Here are common letters in the English-language alphabet with their corresponding hieroglyphs.

Many of these hieroglyphs relate to animals and everyday items: A, for example, is a vulture; M, an owl; J, a snake; T, a loaf of bread; CH, a tethering rope; P, a stool; N, water; B, a leg.

Common concepts in Egypt had their own hieroglyphs. The most enduring of these is the ankh, symbol for eternal life, still widely sold to tourists in Egyptian cities: ☥. You can see the ankh symbols in the picture below, of Luxor Temple. The hieroglyphs in the cartouches (ovals) depict the pharaoh Rameses II.

DiscoveringEgypt.com has a fun hieroglyphic typewriter you can try out. Here’s my name in hieroglyphs:

My son used to try to interpret hieroglyphics. One of my granddaughters is big fan of Tutankhamen. I spent two months in Hurghada in 1992. I had a cartouche made for my daughter. Unfortunately we were confined to the immediate area except for the ship spending a couple of days in Safaga.

Hopefully one day you will be able to return, Ray, and explore further.