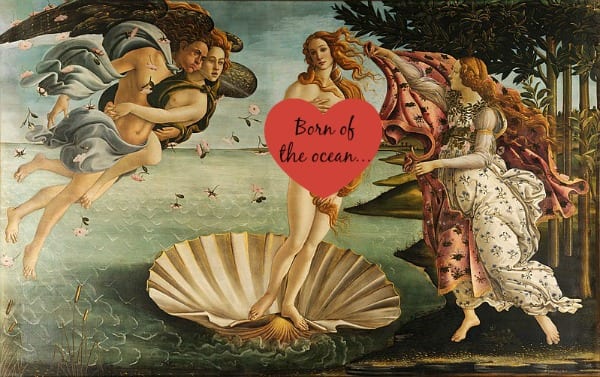 My upcoming novel, set on a Greek island and rich in ancient mythology, is called Aphrodite’s Tears. No doubt you know that Aphrodite was the Greek goddess of love, beauty and pleasure (like her Roman counterpart, Venus). But do you know how, so legend tells, Aphrodite came to be?

Perhaps you have seen paintings, like the one I’ve shared here by Sandro Botticelli from the Italian Renaissance, and so you have the idea that Aphrodite was born of the sea. Indeed, her name means ‘risen from the sea-foam’ (aphros).

In my novel, the two main characters, Damian and Oriel, discuss this ancient goddess over a meal, and Damien explains what precedes Aphrodite coming ashore in a scallop shell:

‘Uranus and Gaea bore a race of deities that were hideous to look at. Uranus did not care for these children due to their monstrous appearance and banished them to the abyss beneath the underworld, known as Tartarus, the Greek equivalent of the dungeon of Hades. Gaea became angry about this and conspired with her children to depose their father. Then, while Uranus was bedding her, Kronus, their son, escaped from Tartarus and castrated his father with a sickle of his mother’s creation. The testicles were thrown into the sea and they foamed into the ravishing Aphrodite.’

Oriel’s reaction (and perhaps your own at this point): ‘Gruesome!’

Damien’s words are based on Hesiod’s account of Aphrodite’s birth. Hesiod was a Greek poet from the seventh and eighth centuries BC, a contemporary of Homer. According to Homer’s epic poem the Iliad, Aphrodite was the daughter of king of the gods Zeus and the Titaness Dione.

(A brief chronology: First came the primordial deities, including Uranus and Gaea. Their offspring were the Titans, including Kronus. Kronus overthrew his father and the Titans became the ruling deities. Then Kronus’s children [Zeus, Hades, Poseidon, Hestia, Hera and Demeter] overthrew the Titans and ruled, unchallenged, thenceforth from Mount Olympus.)

In Hesiod’s account, Kronus’s dismembered parts ‘were carried over the sea a long time, and white foam arose from the immortal flesh; with it a girl grew’. The girl was borne out of the sea on a shell. Where she came to shore is known as Aphrodite’s birthplace, but in fact the exact location has always been contested. Some believe she came ashore on the Ionian island of Cythera, and thus she was also known as Cytherea, the Lady of Cythera – Homer called her, in his hymn To Aphrodite, ‘rich-crowned Cytherea’. Others called her Cypris, the Lady of Cyprus, for they believed she first set foot on land at Paphos, Cyprus. Some take the middle ground, and attest that Aphrodite went first to Cytherea and then to Cyprus; certainly she was worshipped in both places, in temples dedicated to her.

Visit Paphos and you can see Aphrodite’s Rock, a magnificent sea stack that juts towards the heavens. As local legend has it, the rock is part of Kronus himself. There is a local custom too: anyone who swims around the rock will be beautiful forever. Unfortunately, however, the sea by the rock is treacherous, and people are warned not to swim, and so any who seeks eternal beauty risks that beauty being only in the afterlife.

The birth of Aphrodite (and her Roman counterpart, Venus) has been inspiring people for centuries, not only those followers of Aphrodite who seek beauty and love, but also those artists who look to explore all that is fantastical, dramatic and sensual in the myth. Pictured with this article is Botticelli’s The Birth of Venus (c. 1485), on which, as you can see, I have discreetly overlaid a caption. Modesty, you see, does not come into play when depicting Aphrodite! In just about every artwork – be it painting, mosaic or sculpture – the goddess is depicted naked, rising from the water. She is absolutely beautiful too, of course, which accounts for how she came to have so many lovers, both gods and men. But that is a whole other story, which I shall save for another day…