This week I’ve been reading the brilliant Authorisms: Words Wrought by Writers by Paul Dickson.

Regular readers of my blog will known that I am a logophile – a lover of words; so much so that on a summer’s afternoon I’m often to be found like this: 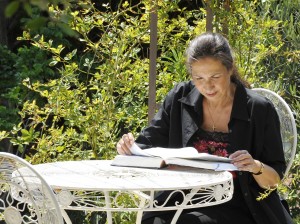 Yes, I’m reading a dictionary; and I often read the thesaurus too. One of the elements I love in my study of language is etymology, which concerns the origin of words; and neologisms – made-up words – are especially fascinating. But until I read Authorisms, I had no idea just how many words and phrases in common use were coined by humble authors!

William Shakespeare’s written vocabulary consisted of 17,245 words, including hundreds that were coined or popularized by him. Some of the words never went further than their appearance in his plays, but others-like bedazzled, hurry, critical, and anchovy-are essential parts of our standard vocabulary today.

Many other famous and lesser-known writers have contributed to the popular lexicon. According to theOxford English Dictionary, Sir Walter Scott ranks second to Shakespeare in first uses of words and giving a new and distinct meaning to already existing words (Free Lances for freelancers). John Milton minted such terms as earthshaking, lovelorn, by hook or crook, and all Hell broke loose, and was responsible for introducing some 630 words.

Gifted lexicographer Paul Dickson deftly sorts through neologisms by Chaucer (a ha), Jane Austen (base ball), Louisa May Alcott (co-ed), Mark Twain (hard-boiled), Kurt Vonnegut (granfalloon), John le Carrè (mole), William Gibson (cyberspace), and many others. Presenting stories behind each word and phrase, Dickson enriches our appreciation of the English language in a book as entertaining as it is enlightening.

The book is well-written, and I very much like its organization in a simple A to Z format. I read it in a single sitting, I was so fascinated to learn who invented phrases like the American dream, identity crisis, fashionista, blurb, international, pandemonium, scientists, scaredy-cat, utopia – oh, so many! Some of the history is fascinating. Take Gotham, for example – a New York nickname made famous by Batman; but it was in fact first applied to NYC by Washington Irving, not as a compliment: it derived from Gotham in Nottinghamshire, England, which meant Goat Town and supposedly was full of imbeciles. Then there is Oxbridge, the commonly accepted term for the elite Oxford and Cambridge Universities in the UK: it was invented by William Makepeace Thakery as a fictional university in his novel Pendennis.

I find the book fascinating, but also immensely inspiring for its nod to authors as an important force in the development of language. As the Guardian noted:

For language fanciers it is a potentially vertiginous thought that every single word must once have been coined by a particular individual. Even the most familiar lexemes – say, “mud” or “pants” – were once inspired novelties. Of course, a compilation of all coinages would be nothing but a whole dictionary. And the vast majority of coiners are unknown to lexicographical history. So Paul Dickson has, here, narrowed the field to coinages by authors.

What better respect can one give an author than to take his or her coined term and make it part of the vernacular? To be ever-honored, for example, in the romantic by every utterance, every penning of the word starcrossed (Shakespeare; Romeo and Juliet: “A pair of star-cross’d lovers take their life”) – that is immortality!

So ought we authors to dig deep into the realms of creativity and pepper our books with neologisms? Should my latest heroine combustibayearn for her lover; my latest hero bewondereyeher beauty? I think, perhaps, my readers would wonder at my spelling! But should we writers as a body continue to play with language, to arrange letters and sounds in such a way as to express what is as yet undefined? Ought we, as Elizabethan writer George Puttenham wrote, to “coigne find words” (so coining the word ‘coin’)? Oh yes!