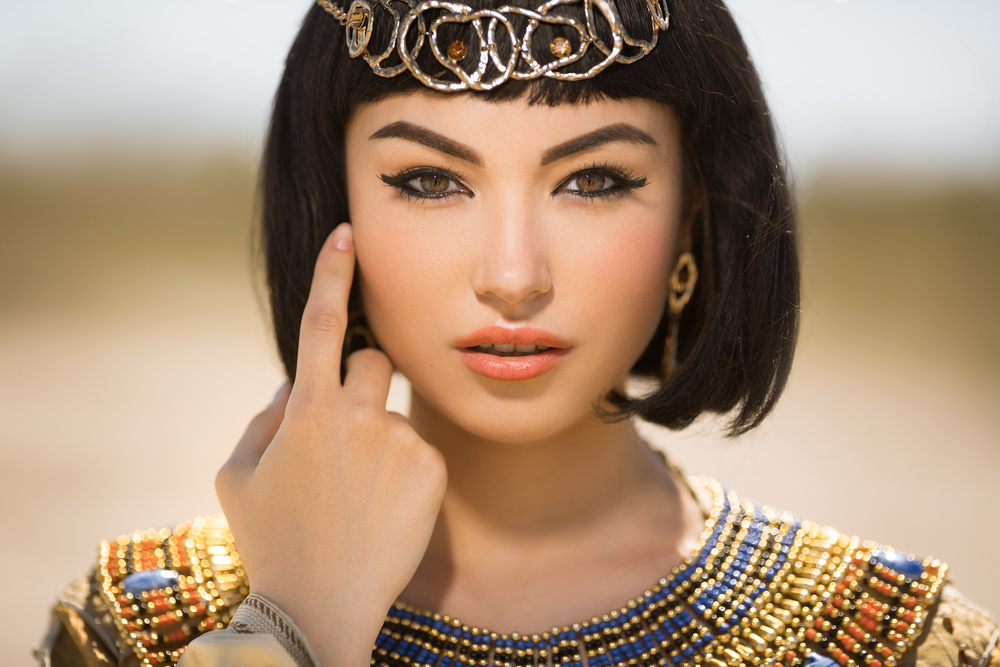 Cleopatra is famous for being the last ruler of the Ancient Egyptian civilisation, and for her passionate relationships with the Romans Julius Caesar and Mark Antony. But there is a great deal more to her story…

1. She was not the one and only Cleopatra

When we think of Cleopatra, we are in fact thinking of Cleopatra VII Philopator, the last ruler of the Ptolemaic Dynasty who reigned from 51 to 30 BC. Queens of this dynasty were called either Cleopatra, Arsinoe or Berenice, and our Cleopatra was the seventh queen to bear this name.

2. She wasn’t actually Egyptian
How did someone who wasn’t even Egyptian come to be reigning over the country? Well, Cleopatra’s linage can be traced back to Ptolemy I Soter, the founder of the Ptolemaic Dynasty, and he was a Macedonian Greek – a friend and general of Alexander the Great, who’d taken control of Egypt in 332 BC.

Though she wasn’t Egyptian by birth, Cleopatra did embrace many traditions of her country, and she made the effort to learn the language (along with seven others!).

3. She was more than just a pretty face…

… a lot more! In some depictions of Cleopatra from the time – for example, on coins – she is not actually very beautiful, but has a large nose and a manly look about her. This was likely deliberate, however, to make her appear more male and, therefore, more powerful. The Romans depicted her as a stunning seducer (this suited their political aims), but she was no vacant-minded beauty – she was very bright, a student of several fields who liked to converse with scholars. She was astute, too, and charming: in order to meet with the Roman general Julius Caesar, she had herself smuggled into his personal quarters in a carpet and then was theatrically unrolled at his feet.

4. She married (and doomed) two of her brothers

An uncomfortable idea for us these days, but in the Ptolemaic dynasty it was entirely common for the royal family to keep marriage in the family in order to preserve the bloodline. Cleopatra’s parents, for example, were brother and sister.

Cleopatra’s first husband was Ptolemy XIII: she was 19 when they married and he was 10. Given that the king was so young, Cleopatra was able to pretty much rule in his place – but eventually he grew tired of this and orchestrated events so that she was driven out of Egypt. Undeterred, Cleopatra raised an army to march back into Egypt and fight her brother for the throne. Julius Caesar intervened, and in the process fell in love with Cleopatra, and Ptolemy XIII ended up dying in the Battle of the Nile.

Cleopatra then married her brother Ptolemy XIV, who was age 11 or 12, and Caesar declared them co-rulers. Again, Cleopatra’s brother was king in name only – Cleopatra wielded the power. By now Cleopatra and Caesar were engaged in a passionate affair, and the result was a son, Caesarion. In 44 BC, just three years after marrying his sister, Ptolemy XIV was murdered on the orders of Cleopatra, to clear a path for a new co-ruler, Caesarion, now Ptolemy XV.

5. Cleopatra may not have died from an asp bite.

Following the assassination of Caesar, Cleopatra had turned her attention to Mark Antony: a sensible political alliance, but also a love match, it seems, for these lovers were the inspiration for Romeo and Juliet. When Anthony mistakenly thought Cleopatra was dead, he inflicted a fatal wound on himself and demanded he be taken to her tomb to die beside her. But at her tomb, he discovered her alive and well, and then died in her arms. Cleopatra then took her own life. So goes the story, she ordered a basket of figs to be brought to her, and secretly she had an asp (cobra) hidden within. When the basket reached her, the snake bit her and she died.

But is this really how she died? Asps are very long – too long, we can imagine, to conceal in a basket. Cleopatra and her maids died very quickly, before Octavian’s guards reached them; many argue that their deaths would have taken longer. Did Cleopatra in fact poison herself (apparently, she kept poison at hand)? Or did Octavian have her killed, paving the way for him to take Egypt into his Roman Empire?

6. Her palace has only recently been discovered.

Ptolemaic pharaohs lived in my home city of Alexandria, which was founded by Alexander the Great and was largely Greek. In the 1990s, archaeologists discovered the small island of Antirhodos in the harbour. Here, sunken beneath the sea, lie Cleopatra’s palace and other important buildings, including temples devoted to Isis and to Caesar, and a palace for Mark Antony that was never completed.

Bust of Cleopatra, believed to have been found in her palace

7. Cleopatra’s tomb has never been found

She shall be buried by her Antony
No grave upon the earth shall clip in it
A pair so famous.

Archaeologists continue to search for the tomb of this most famous queen and her lover.

I was doing the Ptolemy family tree for one of my Egyptology papers and was surprised how many Cleopatra’s there were! Mind you the whole Ptolemy family tree is a little sordid and brutal, if you survived your spouse (who was also probably your brother, uncle or even your father!) one of your children may try to bump you off!