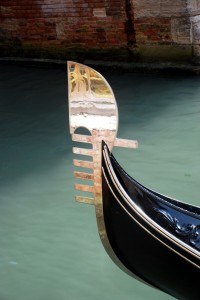 My novel The Echoes of Love opens in Venice, and so naturally descriptions of gondolas such as this one feature from time in time when I’m setting a scene: A couple of gondolas, their great steel blades looming dangerously out of the soft velvety mist, glided by swiftly over the gently lapping waters.The ‘great steel blades’ on the prow are an essential element in the description; part of the quintessential design of the gondola.  But did you know that they are under threat of extinction?

The metal blade is called a fero da prora, and it serves an important function: to balance the weight of the gondola at the stern. It is also a decoration that is rich in symbolism. First, the colour – Paolo explains this when he narrates a legend to Venetia in The Echoes of Love:

‘A crescent moon plunged into the sea to provide a shield of darkness for two young lovers to be alone together. That is the reason for the black colour of the gondola, caused by the abrupt immersion of the phosphorescent body in cold water, and the reason for the silvery lustre of the prow and the stern, which remained out of the water.’

Then the shape. Some say the S shape symbolises the turns of the Grand Canal; some say the overall look is to recall the mane of a lion, the symbol of Venice. The six-toothed comb beneath represents the six sestieri of Venice. The backwards tooth, the risso di poopa (hedgehog of the stern) stands for Giudecca. The friezes that sometimes feature between the six teeth represent the three major bridges of Venice: Rialto, Accademia and Scalzi.

Clearly, the fero da prorais a many-faceted element of the gondola. Why, then, are so many gondoliers today removing it from their craft? The answer lies in the rising water levels in the city (for details of this, see my earlier blog post ‘The fragility of Venetian beauty’). Venice is a city of waterways; and a city of bridges; and a city of gondolas that need to pass under bridges. But the acquaalta (high water) caused by rising sea levels means that the gondolas are coming ever closer to the underbelly of bridges, and the metal is at times scraping along the stonework.

To preserve the heritage of the gondola and ensure its full beauty remains, authorities in Venice impose strict rules on the craft and their pilots. In recognition of the problem, they have suggested that gondoliers make the fero da prorahinged, so they can flip them down under a bridge and then back up when in full view. But few gondoliers take this option; instead, a recent article in the Guardian suggests that instead ‘almost all’ remove their metalwork. The problem is that high waters are becoming less a rarity and more a way of life. In 1983 only 35 high water times occurred; last year Venice saw 156. Gondoliers are seeking a permanent solution to fitting easily under bridges.

The authorities have retaliated, meanwhile, by introducing fines for gondoliers not displaying a fero da prora, but without the means to combat the rising water levels, there is ultimately little they can do to protect this element of the gondola.

The gondola has long been a symbol of Venice, and in a sense that symbolism is now extending to the shaky footing on which the city’s future lies. At some point, presumably, the gondolier will cease to fit beneath a bridge – unless every bridge is rebuilt to be higher, and every street in Venice reinforced against the high water or built up. The death of the gondola is a sobering thought. It is one that makes me keen to revisit Venice, because who knows for how long its current vistas and culture will remain intact for our appreciation?