‘A rare rose to add to my garden…’ How will Aida, heroine of Song of the Nile, feel about visiting a prince’s harem? 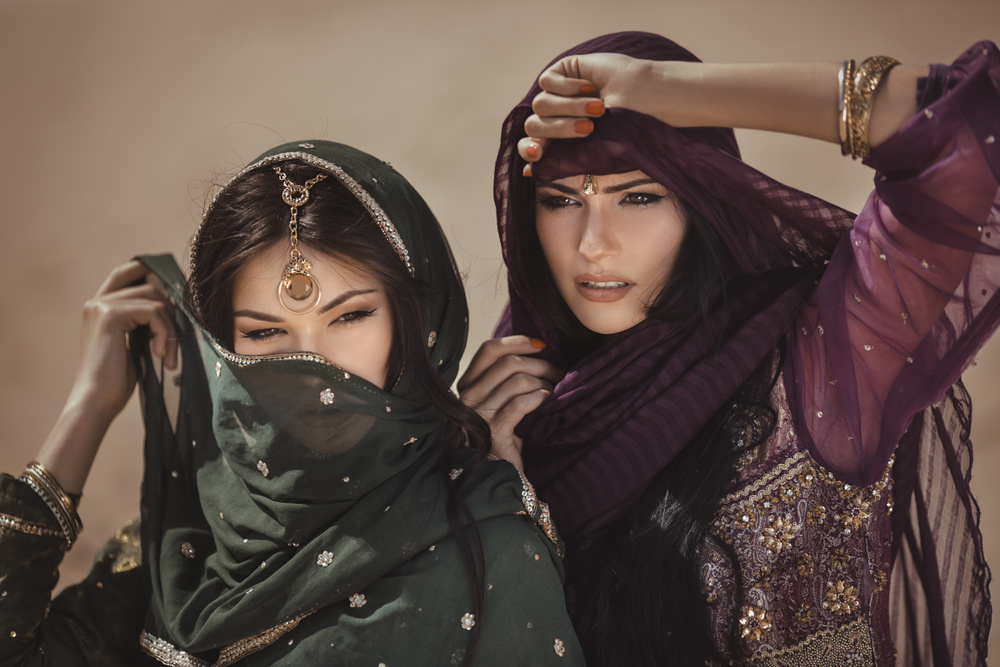 The word harem is defined as ‘the separate part of a Muslim household reserved for wives, concubines and female servants’ (source: OED). The key words here are female and separate: in the harem, women are kept in seclusion, isolated from men.

(It’s worth noting, given that Song of the Nile is set in Egypt, that we also use the term harem to refer to the quarters of the royal women and children in Ancient Egypt; the harem at Medinet Habu is a prime example. But in Ancient Egyptian harems, women were not isolated from men.)

The harem can be home to a man’s wife (or wives), her daughters, her sons until puberty, female servants and other single female members of the family. Historically, it could also include enslaved women known as concubines and eunuchs who acted as guards.

The idea of the harem is to create is a sacred place where women are protected. At one time, they were romanticised in cultural representations, depicted as places where sensual women waited eagerly to please their man. 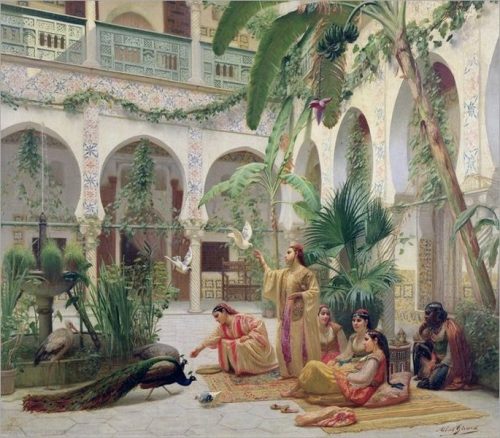 Court of the Harem by Paul-Albert Girard

But in our modern times, where we strive for equality, many see harems as a place where women are trapped and subjugated. Leila Ahmed, professor of women’s studies in religion at Harvard Divinity School, has argued that harems are based on the ‘ideal of a man’s right to keep his women concealed—invisible to other men’.

In Song of the Nile, my heroine Aida is a strong and independent woman of the 1940s who feels she has no need of a man to protect her and certainly could not live to please a man. So when she meets an Arab prince, Shams Sakr El Din, she is not impressed to learn he has a harem at his kingdom in the desert, Wahat El Nakheel, Oasis of Palms. I write:

The prince regarded her through a curl of smoke with a look of surprised gratification. ‘Beautiful, intelligent, and witty with it. A rare rose to add to my garden.’

‘Your garden?’ Aida did not like the sound of this.

The reptilian eyes narrowed again, and his smile was enigmatic. ‘Yes, my harem.’

‘Ah yes, I’d forgotten,’ she replied drily. ‘You couldn’t be a respectable prince without a harem.’

‘Doesn’t it pique your female curiosity?’

‘Not one bit. I find the concept somewhat barbaric and retrograde. Surprising in men of your education.’

Prince Shams Sakr El Din laughed, though it was more of a snort. ‘Education has nothing to do with it, habibti. I can’t believe you are so naïve about the world that you cannot understand the concept of the harem … a man’s garden where many flowers bloom for his pleasure … with different colours, textures, fragrances.’ His gaze dropped to Aida’s lips, then lowered to her throat and bare shoulders, shamelessly devouring with his eyes every bit of her bare skin.

Aida is hardly swept away by the prince’s flirting; if anything, she’s somewhat repulsed. But when the prince invites her to a picnic at his oasis, she doesn’t dismiss the idea.

Everything inside her burned with curiosity to see the inside of his palace and what it was like to travel by camel to Wahat El Nakheel. It would certainly be an adventure, and something inside her still craved excitement.

The invitation is for a big group of people, so Aida won’t be alone. She may not like the prince much, but she’s drawn to the thought of exploring the desert in this way, and to see an oasis. Plus, since returning to Egypt she’s felt the pressure to be a good Egyptian girl, and she’s grown heartily sick of it; much more fun to be the life and soul of a party.

So what if she’s been told the prince is on the lookout for beautiful women to add to his harem? Surely Aida will be perfectly safe travelling to the oasis… won’t she?