Osiris and Isis were very important deities in Ancient Egyptian religion, and their story has endured to this day.

Osiris was the god of the dead and the resurrection into eternal life, and he was the ruler, protector and judge of the deceased. When the pharaoh died, it was believed that he became Osiris so that he could continue to rule after his death.

Isis was the wife and sister of Osiris, and she was the mother goddess, believed to be the divine mother of the pharaoh. Her main role was to help the deceased in the underworld.

So how did Osiris and Isis come by their roles? According to hieroglyphic writings found on pyramids, temples and tombs, their origins story is as follows:

The earth was created by the sun god Atum. He had a son, Shu, and a daughter, Tefnut, who separated the sky from the earth; their daughter, Nut, became goddess of the sky and their son, Geb, became god of the earth. Nut and Geb had four children: Osiris, Set, Isis and Nephthys. The brothers and sisters paired up: Set married Nephthys and Osiris married Isis. 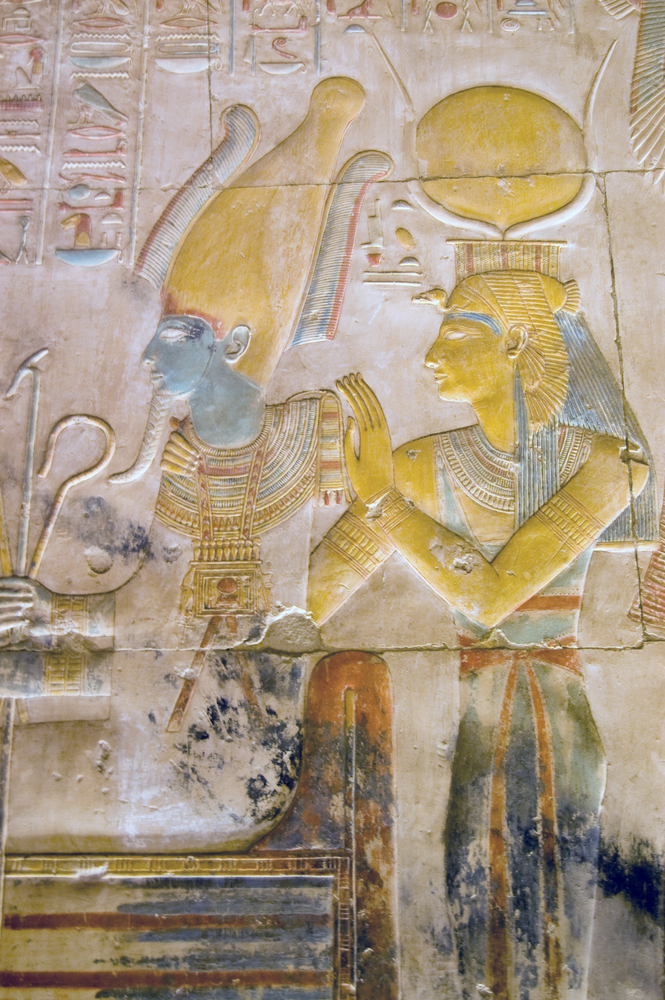 Painted relief of Osiris and Isis, Temple of Seti I at Abydos

Osiris was the eldest son, and he became the king of Egypt. He was a good ruler, teaching the people how to worship the gods and maintaining peace in the land. But Seth was jealous of his brother’s popularity with the people and his power, and he hatched a plan to kill Osiris and take the throne.

There are various versions of Osiris’s murder, the most popular being that Seth managed to trap his brother in a chest and throw it into the Nile, drowning Osiris. Then, when his brother’s body washed up on the riverbank, Set chopped it into fourteen pieces and scattered these across Egypt.

Isis, as you can imagine, was distraught when she learned of Seth’s terrible act. With her sister Nephthys, Isis searched all over Egypt to find each part of Osiris. She collected all but one – Osiris’s manhood. Then Isis worked with Thoth, god of magic, and Anubis, god of funerary rites and death, to sew Osiris back together, embalm his body and wrap it in linen (making him the first mummy).

Then Isis used her magic to resurrect Osiris. It was impossible to bring him back to life entirely, but she could do so for one day. So Isis transformed into a kite and she flapped her great wings to breathe the breath of life into Osiris. The couple were reunited, and then Osiris passed into the afterlife to rule as king of the underworld.

During their brief time together, Isis and Osiris had conceived a child (made possible by Isis having crafted a manhood for Osiris from clay). After Horus was born, Isis hid him away to keep him safe from his uncle. Once he reached adulthood, Horus – with a little help from Isis – challenged Set for the throne and won, restoring order to Egypt. 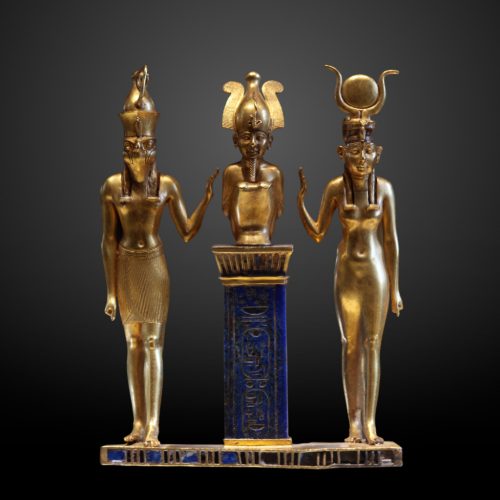 Isis, Osiris and Horus, statuette of the 27th Dynasty at the Louvre, Paris

This story – myth, if you like – was very important to the Egyptians. We know that it existed in the 24th century BC, because it appears in the Egyptian funerary texts from this era called the Pyramid Texts, which were found inscribed in the walls of burial chambers in pyramids. Because the gods were in human form, it was easy for people to identify with them, and the story was a foundation for beliefs about healing, death and the afterlife.

The story inspired people to believe death could be overcome, if only they worshipped Osiris and received funerary rites relating to his story. Plus, because in the story Osiris and Horus were cast as the ‘good guys’ and Set as the ‘bad guy’, the belief developed that to move on to the afterlife one had to be a good person. Osiris would make this judgement after death.

Also influential was the part of the story in which Horus and Set fight. In retaliation for Horus hurting Set’s testicles, Set tore out Horus’s eye. The Eye of Horus came to have great symbolism: in particular, it came to represent wellbeing, healing and protection as well as funerary offerings and was featured prolifically in art and jewellery. 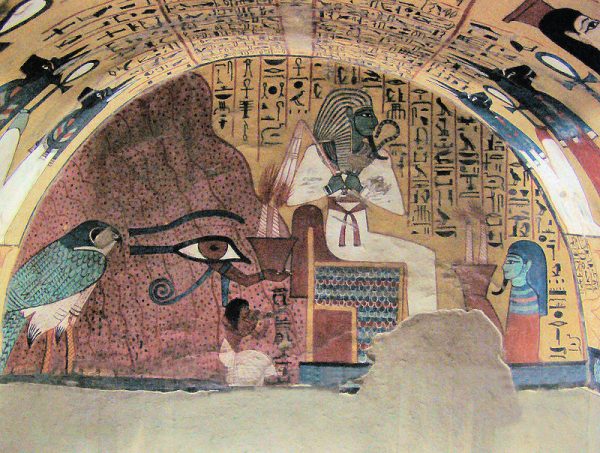 Personification of the Eye of Horus making an offering to Osiris

Due to the Isis and Osiris story, Isis and Nephthys were also important in religion, and they were often depicted in tombs as offering protection to Osiris or the mummy in the tomb. Isis in particular, as the mother goddess with the power to heal, grew immensely popular, her cult spreading beyond Egypt to the Mediterranean. In artworks she was often shown holding baby Horus and it is thought that this may have inspired early depictions of Mary and Jesus.

The cult of Isis and Osiris endured until the 6th century AD at the Temple of Philae: Osiris was believed to have been buried nearby, and the temple was devoted to Isis. Philae was one of the last pagan temples in Egypt to be used in Christian times. The religion may have faded from memory then, but Isis and Osiris did not, for classical writers preserved their story in their writings, and of course today we are able to see them in many artefacts, monuments and tombs uncovered in Egypt.