In Song of the Nile, Phares and Aida explore a famous and historic part of Cairo: the Khan el-Khalili bazaar and souk. 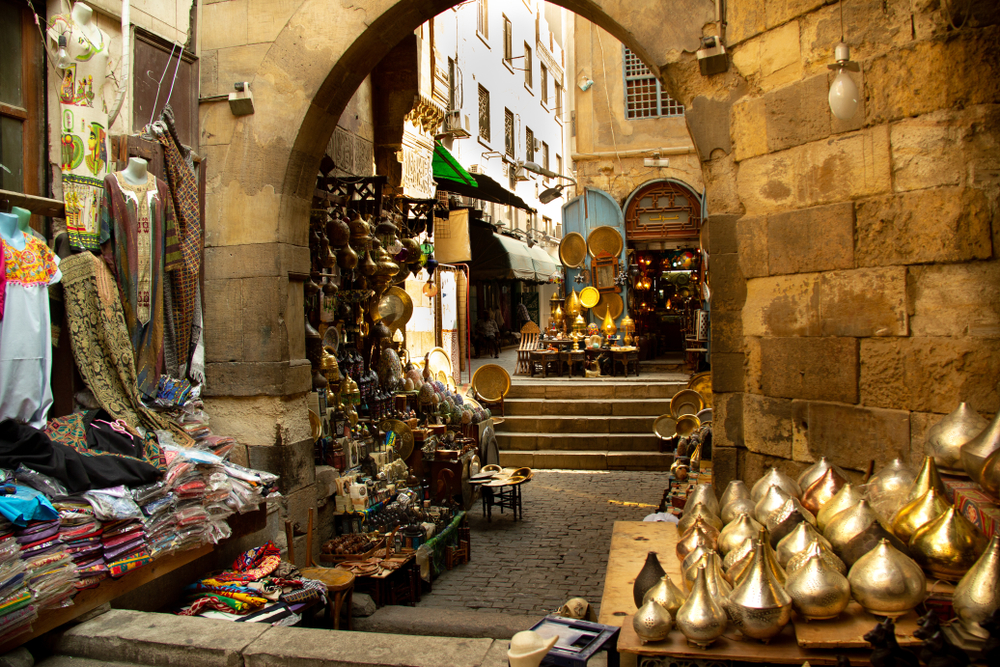 The winding streets of this centre of trade were first established back in the Mamluk period (14th to 15th centuries), and to this day local people frequent the stalls and shops, which sell just about everything under the sun. Of course, the bazaar is also a big draw for tourists, who come to see the amazing array of goods on offer, some handcrafted at the Khan el-Khalili.

Here is how Aida perceives the Khan el-Khalili as she arrives:

Dodging around the modern bulk of the opera house and the Turf Club, Aida and Phares skirted the Ezbekiyeh Gardens and, crossing the square where the various tram lines of the city met, they entered the real Cairo, the African Cairo, a totally new world which led to the bazaars and the Musky, or the Khan Khalil as it was known to Egyptians.

No more broad streets, no more fine buildings. It was one vast huddle of old structures, some of them rather fine examples of the architecture that prevailed in Cairo when the merchants were kings. Into the mass of close-packed houses was threaded a network of numberless deep, dark alleys and narrow lanes overhung with the pretty, wiry balconies of harems, almost meeting above the jostling crowds. They appeared secretive and mysterious; Aida wondered what lay behind them, her imagination conjuring up all sorts of romantic images.

The red tarbooshes and coloured turbans of the natives in a variety of costumes formed a bobbing sea on either side of the road lined with a brilliant assortment of sweetmeat shops, fabric stores and fruit sellers. Through the car’s open window, Aida watched the bright multitude thronging the streets in a motley picture of such effective colour schemes that never failed to enchant her eye. Her ears, too, were enthralled by the street cries and passing music, and the wailing prayers from the top of the tall minarets.

The old Turk who was setting up his cake stall in the recess of a sculpted doorway; the donkey-boy with his colourful caparisoned animal, waiting for customers; the beggar asleep on the steps of the mosque; the veiled woman filling her water jar at the public fountain – they all looked as if they had been put there expressly to be painted. 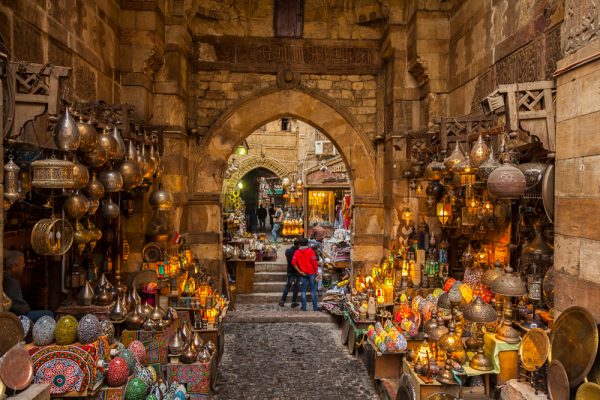 The Khan el-Khalili is famous for its gold quarter, where you can pick up fantastic pieces of jewellery.

One of Aida’s favourite streets was Souq El Dahab, the gold market. There were hundreds of pairs of earrings on show, crescents of heavy-worked gold and droplets of seed pearls. There were bracelets and gold beads, charms to hang about the necks of newborn babies, golden miniatures of the Koran that opened like lockets, crosses, and Coptic and pharaonic ‘key-of-life’ symbols swinging from delicate chains.

Here, Phares buys Aida a gold pharaonic-shaped eye pendant with a turquoise bead in the centre. Their shopping continues in the Musky, a tangle of labyrinthine bypaths where one could be lost for hours. I write:

Aida loved the exotic scents, veiled light and smothered footfalls. The colour and strangeness of this Oriental bazaar had always fascinated her. In the past, she had spent many an hour rambling among its stalls, buying silks and bottles of scent and bits of beaten brass and silver. After the dazzling, sun-flooded streets, the Musky was dim, filled with flickering lights and shadows. After the noisy bustle outside it was quiet, mysterious, the only sounds the slip and patter of heelless shoes, the guttural low voices of the stallholders. Incense and perfumes, the smell of leather and coffee and spices and less delectable smells made the air heavy and exotic.

Phares and Aida threaded their way through the maze in the flickering shadows of the dim, mysterious aisles. They went past tiny shops offering exquisite items of inlaid work and mosaic. The bazaar was a delightful beehive: some were blowing glass, others were weaving linen; even the lame and the blind seemed to be working. A bench was set in front of almost every shop where sat a venerable and turbaned patriarch, pulling industriously at his narghileh. 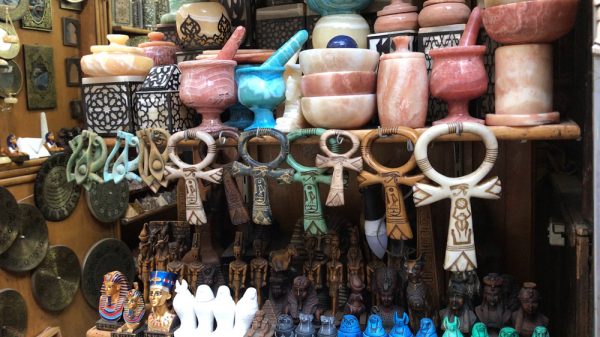 Bartering and bargaining are standard in the Khan el-Khalili. Aida thoroughly enjoys negotiating on price.

To her delight, Phares let Aida do the bargaining, causing much sonorous laughter among the stallholders. He found the process tiresome and she was a master at that game. The shopkeeper as a rule demanded more than he expected to receive and it was up to Aida to declare the price exorbitant, offering half the sum, which was of course rejected, but resulted in him lowering his price and both buyer and seller were satisfied. She loved this dance of negotiation that had been the way of things for thousands of years. Aida bought a rug, a beautiful silver-encrusted black Bedouin kaftan and one of those baskets woven with palm leaves that Phares had talked to her about.

Aida and Phares, being native Egyptians, are at an advantage, for the shopkeepers soon realise they cannot hoodwink them. When they ask Aida if she needs powdered baby crocodile skin to rub on warts or a bag of herbs to assure safe delivery of a child, Phares answers in Arabic and immediately the traders give a charming, sheepish laugh and back off.

Finally, they walk through the spice domain and its incense-laden atmosphere to the scent bazaar – the most delectable in Cairo, Phares tells her. There, they meet Suleiman Abdel Hadi, maker and vendor of perfumes, who blends for Aida her own signature scent from the wide selection of spices, herbs and petals in his shop.

‘What is it called?’ asked Aida.

Old Suleiman’s eyes travelled from Aida to Phares, and he smiled. ‘Nasmet El Aroussa, Fragrance of a Bride.’

Aida blushed a deeper red, feeling rather embarrassed at what he was obviously implying, but the fragrance really suited her. ‘I’ll buy it,’ she told the man. ‘It’s lovely, thank you.’

‘I’ll buy it,’ Phares cut in, taking out his wallet, his tone indicating that he would not stand for any argument.

If you are ever in Cairo, I hope you will take a couple of hours to browse the wares at the Khan el-Khalili and find some treasures. And be sure to take a break in one of the little coffee houses for a cup of Arabic coffee. El-Fishawi is a popular choice; it dates all the way back to 1773 and has a wonderfully lively atmosphere.