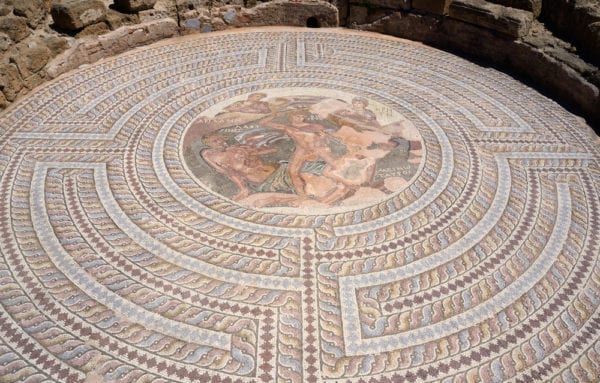 ‘Tell me about this house. It seems enormous, a real labyrinth…’

So says Oriel, the heroine of my new novel Aphrodite’s Tears, with regard to the big house on the island of Helios where her new boss lives.

Nods to Greek mythology are interwoven throughout Aphrodite’s Tears, and of course in a novel fraught with complexity, twists and turns, and a brooding, underlying danger, I had to bring in the Labyrinth.

According to the ancient stories, the Labyrinth was a very large maze designed and built by Daedalus (father of Icarus; see https://hannahfielding.net/staging/1129/icarus/) for King Minos. The maze was situated near the real-life palace of Knossos on Crete, and it was built there to contain a ferocious, man-eating beast: the Minotaur – part man and part bull.

The Labyrinth was exceptionally complicated in design – so difficult to navigate, in fact, that its very architect, Daedalus, struggled to find his way out upon its completion. Hence to this day we use the words labyrinth and labyrinthine to refer to a system or network that is intricate and confusing.

In early depictions of the Labyrinth, however, it was portrayed as unicursal rather than mulitcursal, meaning there was a single path from the centre to the outside rather than many paths branching off. Here is the Labyrinth on a coin from Knossos dating back to 400 BC:

This Classical design was taken up by the Romans and became familiar the world over. To this day, labyrinth designs can often be found in old Gothic churches; in Chartres Cathedral, France, for example, devoted pilgrims come to walk the path of the eleven-circuit labyrinth set into the floor in the year 1200.

So goes the myth: to feed and appease the Minotaur, Minos ordered that fourteen Athenian young people – seven boys and seven girls – be cast into the Labyrinth every seven years (the inspiration for the very popular Hunger Games novel series). Come the third round of sacrifices, the hero Theseus volunteered to put an end to this horror by slaying the beast himself; and so he did – with the help of Minos’s daughter, Ariadne, who gave him a ball of thread he used to navigate the Labyrinth and lead his fellow Athenians to safety.

Theseus shows us that mastering the Labyrinth – and its beast – requires courage and intelligence. What matters most is to keep moving with purpose, because inertia is perilous: better to be the hunter than the hunted; better to be the captain of one’s fate.

Here is a final glimpse of Aphrodite’s Tears, in which Oriel must decide whether to walk in Theseus’s footsteps when she finds herself plunged into her own hellish labyrinth:

Turning on her torch again she surveyed her prison, slowly moving around it, feeling every step carefully before trusting her weight to it. She was standing in what appeared to be a clean split in the rock itself. Whether the fissure led to any other tunnels or caves in the warren she wasn’t sure. Underfoot, the uneven surface of the floor sloped steeply downward. Was it even sensible to wander further into what might be a labyrinth deep in the heart of the cliff, the walls of which – unsettled by the earthquake – might cave in at any time?

Or should she wait for help? Still, what if nobody came to rescue her? Sweat began trickling between her shoulder blades. What had the Oracle on Delos called her, Antigone? In the Greek tragedy hadn’t Antigone been buried alive? No, she couldn’t just wait there passively … she had to find a way out.