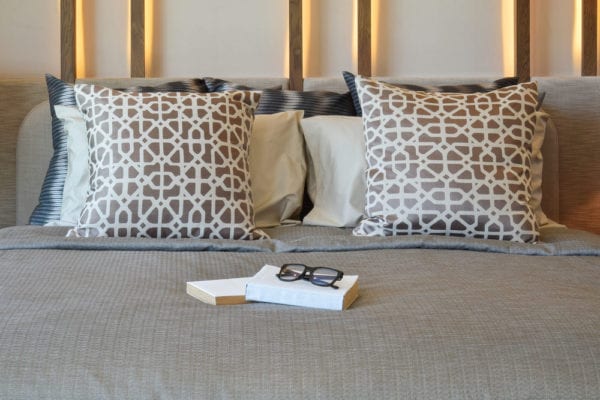 In Liverpool, you can stay in a hotel modelled on the Titanic; in London, in an imitation Hogwarts; in Montana, in a Hobbit house… Themed accommodation has been growing in popularity in recent years, and now not only can readers escape into the fictional worlds of their books, but they can escape to hotels around the world that cater purely for bibliophiles.

At the Commons Hotel, Minneapolis, book butlers will provide you with complimentary books to read during your stay.

The Library Hotel, New York, has a library of more than 6,000 books that you can peruse, and each of the guestroom floors is dedicated a major category of the Dewey Decimal System. (The Mythology section calls to me!)

L’Hotel, Paris, may be the smallest five-star hotel in the city, but it’s pretty special if you’re a fan of Oscar Wilde, to whom the hotel is a homage. (Wilde died here, after famously saying from his bed: ‘Either that wallpaper goes, or I do.’)

If you’re not only a reader, but a writer as well, then the Wanderlust Hotel, Singapore, will surely appeal. There you can stay in a room decorated to look like the interior of a typewriter.

The Heathman Hotel, Portland, actually hires a library curator, such is the extent of its library, which includes more than 2,700 books signed by authors, including Nobel Prize and Pulitzer Prize winners.

Le Pavillon des Lettres, Paris, offers 26 bedrooms, one for each letter of the alphabet and each dedicated to a different European author, with hand-penned quotations on the walls and a signature work lying ready to read on the pillow.

The Library Hotel, Thailand, is a destination for both reading and contemplation. The chic, modern accommodation and the scenery are so stunning, however, that perhaps you would not make time to browse the library of glossy books.

Where better for a bookworm than a library? The Gladstone in Flintshire, North Wales, is not in fact a hotel – it is a residential library, the legacy of Prime Minister William Gladstone.

The Balmoral Hotel, Edinburgh, is where J.K. Rowling finished the final novel in the Harry Potter series. She lived there for six months, writing in Room 552, which is now renamed the J.K. Rowling suite and open to guests.

In St Petersburg, Russia, the Radisson Sonya Hotel is named for the heroine of Dostoevsky’s novel Crime and Punishment, and here you find literary motifs in abundance: from the lobby, in which 80 different editions of the novel are on display, to the guest rooms, each with a replica of Dostoevsky’s own writing desk.

If you fancy a trip down the rabbit hole, then Wonderland House, Brighton, ‘for those who believe in magic’, is the place to stay. Each bedroom has a different theme inspired by Alice in Wonderland – think flamingos and mirrors and the Queen of Hearts – and at the heart of the hotel is the Mad Hatter Banqueting Room, where the chairs around the ‘enchanted table’ are… teacups!

I think I could quite happily stay at any of these hotels. All of them, even. I could spend a year or more touring the world, staying in hotels with literary themes or connections. What a book I could write about that journey, and what inspirations I would bring home with me.

Have you stayed at a literary hotel? Is there one you’d particularly like to visit? I would love to hear your thoughts.