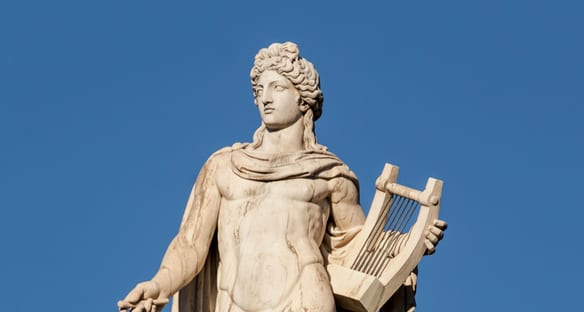 If I could create a ‘booktrack’ for my new novel Aphrodite’s Tears (a musical soundtrack to which you listen while reading), it would feature prominently one instrument: the lyre.

Here is one of my favourite musical scenes in the book, which occurs during the Epiklisi festival, when the islanders of Helios invoke the volcano, Typhoeus, to protect the island. There’s a procession to Mount Helios, with everyone dressed in costume, and then feasting and dancing to music:

At that moment, somewhere beyond the bonfire, a young islander took up a lyre and began to sing a hymn to the volcano that towered menacingly over their island yet also protected the people from outside invasion – after all, the lyrics went, who would want to conquer a land that was threatened to be burned to ashes at any moment?

One after the other, a handful of men borrowed the lyre and sang. The hymn merged into a wild drinking song one of the islanders had learnt among the people of the mountains to the north, before moving on to a song of Lesbos, where the poet Sappho had lived, until, finally, it became a martial chorus of the Spartans, which all the islanders joined in until it seemed as if the whole of Helios was echoing with song.

The lyre is a stringed instrument that’s like a small harp, and along with the aulos (pipes), it was the most common musical instrument of Ancient Greece. It’s played by strumming the strings with a pick (rather than plucking them like on a harp).

Music was very important to the Ancient Greeks – it was played at weddings, funerals, religious ceremonies, theatrical performances, recitations of lyric poetry, leisure activities and, of course, the Olympic Games, and was a core subject for education. As such, everyone was familiar with the beautiful sound of the lyre.

According to Greek mythology, it was Hermes – messenger of the gods and ‘the divine trickster’ – who created the first lyre. So goes the legend, he had stolen some sacred cattle from Apollo, and as he was herding them away he slaughtered one of the cows as an offering to his father, Zeus. From the entrails and from the shell of a tortoise he crafted the lyre. When Apollo caught up with Hermes, he was livid that the young god had stolen his cows. But then Hermes played the lyre, and this calmed Apollo. God of poetry and music, Apollo decided he must have this wonderful instrument, and so he traded his cows for it. Apollo became the master of the lyre, which was why he was often depicted in paintings and sculptures holding the instrument.

What was Ancient Greek music like? This is a question that modern-day scholars have been striving to answer. Just last week an associate professor in classics at the University of Oxford published an article in The Conversation entitled ‘Ancient Greek music: now we finally know what it sounded like’, in which he outlines the research that has informed a new understanding of the sound of the times. He concludes that ‘ancient Greek music should be recognised as the root of the European musical tradition’.

I will leave you with this imagining of Ancient Greek music, played on the lyre, to which I listened for ‘mood music’ while writing Aphrodite’s Tears.