'Ozymandias' by Percy Bysshe Shelley is a poem about this ruined statue of the pharaoh Ramesses – a poem that speaks of wealth and power and glory, and how these are lost to time. 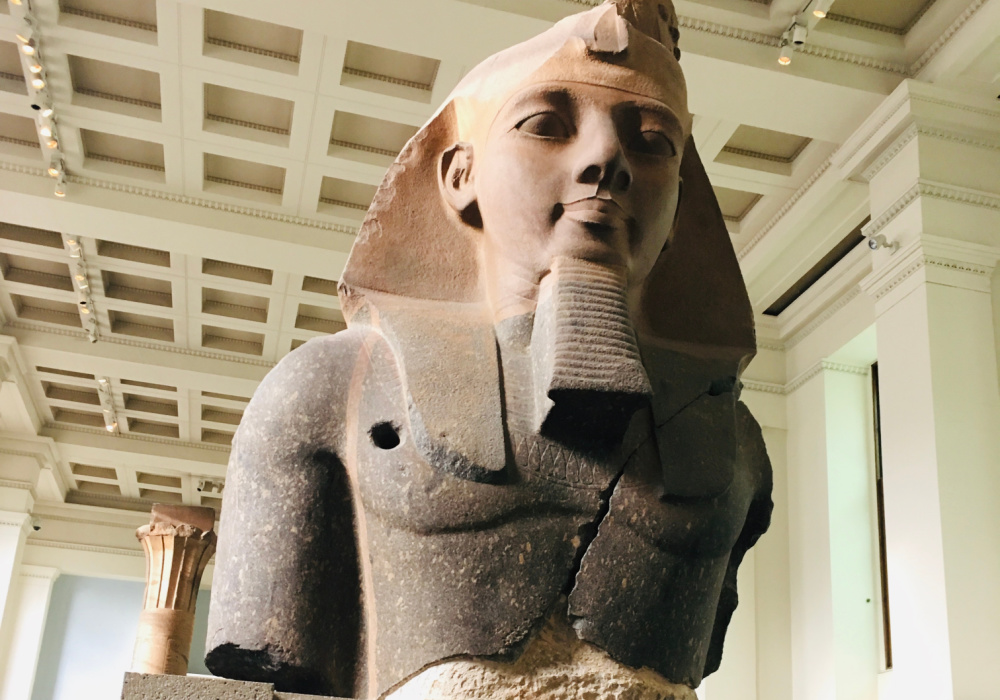 In 1817, the writers Horace Smith and Percy Bysshe Shelley challenged each other to write a sonnet inspired by a passage by a Greek historian about a colossal statue of Ancient Egypt:

King of Kings Ozymandias am I. If any want to know how great I am and where I lie, let him outdo me in my work.

Ozymandias, in Greek, means Ramesses, and the king in question was Ramesses II. Known as Ramesses the Great, he was a popular pharaoh who ruled from 1279-13 BC, during the Nineteenth Dynasty.

In 1817, the British Museum in London added to its collection a granite statue known as the Younger Memnon. It had been excavated from the Ramesseum, the mortuary temple of Ramesses II located at Thebes, Egypt. With its pair, the statue stood guard at the entrance to the Ramesseum and depicted Ramesses II. Once, the Younger Memnon was a full figure, 57 feet tall, with a body and legs, but now only the head remains (and in itself it weighs some seven tons).

It was the news of the statue’s arrival in London that galvanised Smith and Shelley to set pen to paper, and Shelley wrote the now famous poem ‘Ozymandias’, published in 1818:

I met a traveller from an antique land,

Who said—‘Two vast and trunkless legs of stone

Half sunk a shattered visage lies, whose frown,

And wrinkled lip, and sneer of cold command,

Tell that its sculptor well those passions read

Which yet survive, stamped on these lifeless things,

The hand that mocked them, and the heart that fed;

And on the pedestal, these words appear:

My name is Ozymandias, King of Kings;

Look on my Works, ye Mighty, and despair!

Nothing beside remains. Round the decay

Of that colossal Wreck, boundless and bare

The lone and level sands stretch far away.’

A traveller has told the narrator that in an ‘antique land’ (Egypt) he has seen a statue whose head is severed from its body, and in its expression can be seen a frown, a sneer, a cold attitude. The inscription on the pedestal reads:

My name is Ozymandias, King of Kings;

Look on my Works, ye Mighty, and despair!

This tells us of the pharaoh’s hubris, his supreme confidence that all who come after him will know of his power, his glory, his might, and be awed – he is boasting with complete surety that his legend will endure.

Yet this statue is in ruins, decayed, a ‘colossal wreck’, ‘half sunk’ and lost in the ‘lone and level sands’ that ‘stretch far away’. It does not speak of the pharaoh’s might; it speaks of his ultimate unimportance. His life, his works, are inconsequential, lost to time. The statue does not stand as a monument to Ozymandias’s greatness; it is a monument to man’s arrogance and ignorance in thinking that after death, we live on eternally in this world. Ultimately, we will become ‘lifeless things’.

We do not despair in the face of Ozymandias’s power, bowed by it; the true meaning of this pharaoh’s monument is that civilisations will not endure, we will not endure – we too will be buried by the endless sands of time.

We would do well to remember the lesson imparted by this statue: we are not powerful, glorious, mighty; we are simply people, and we should be humble. Life is short, transient. We have only now, and we must appreciate that.