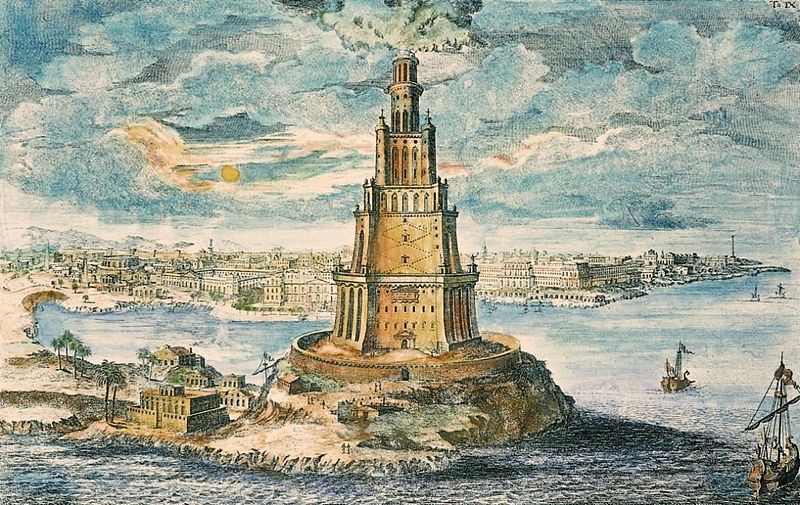 The Pharos of Alexandria was one of the Seven Wonders of the Ancient World, along with the Hanging Gardens of Babylon, the Colossus of Rhodes, the Mausoleum at Halicarnassus, the Statue of Zeus at Olympia, the Great Pyramid of Giza and the Temple of Artemis at Ephesus.

Alexandria was founded by Alexander the Great in the third century BC, and following his death, Ptolemy I Soter became king. He commissioned the building of a great lighthouse that would put Alexandria on the map, to be situated on the island of Pharos in the harbour of Alexandria.

The construction spanned more than a decade (it was completed by Ptolemy II Philadelphus), and the completed lighthouse, made of granite and limestone, was 110 metres tall. This was an extraordinary feat of engineering for the time, making it the tallest manmade structure in the world after the pyramids of Giza. It had three sections: first square, then octagonal, then circular.

According to some sources, the lighthouse originally included a statue on the top, of either Alexander the Great or Ptolemy I Soter as Helios, the sun god. At the top of tower was a mirror that reflected the rays of the sun or the fire lit within to protect voyagers during the night. 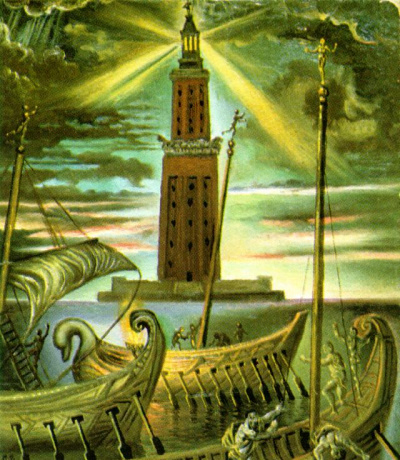 The Lighthouse at Alexandria by Salvador Dali (1954)

Sadly, several major earthquakes between 956 and 1323 AD badly damaged the Pharos of Alexandria, and it was abandoned. The last of the ruins survived until 1480, when a citadel was built on the site. The Pharos was lost.

Fast-forward to the early 1900s, and curious archaeologists began searching for the lighthouse. In the 1990s, French archaeologists found the ruins of the lighthouse on the seabed in Alexandria’s Eastern Harbour: columns, statues, sphinxes, obelisks. Further exploration uncovered houses and temples in other parts of the harbour, drawn into the sea by earthquakes.

Now, the government of Egypt has begun planning the world’s first underwater museum at Pharos, so that divers can see the amazing remains in the harbour. A spokesman from the Ministry of Antiquities said:

This area was one of the most important areas in the world for around 1,000 years. In five meters of water, we have these remains of palaces and temples, but nothing people can see with their own eyes. Having a museum like this will attract more tourists… (Source: Smithsonian Magazine)

To this day, the Pharos of Alexandria remains a symbol of the city, and an inspiration for people around the world (The Sheraton Hotel in Batumi, Georgia, is just one building whose design was inspired by the lighthouse).

When I visit Alexandria, I am drawn to Pharos. I walk along the shore-front Corniche road to Fort Qaitbey, which has stood guard over Alexandria’s Eastern Harbour since 1480, and I look down into the water and think about the ruins down there. Then I look up, up to the sky, and imagine the lighthouse standing there for century after century, an astonishingly tall sentinel and a beacon of light in the ancient world.

The Citadel of Qaitbey, site of the Pharos of Alexandria