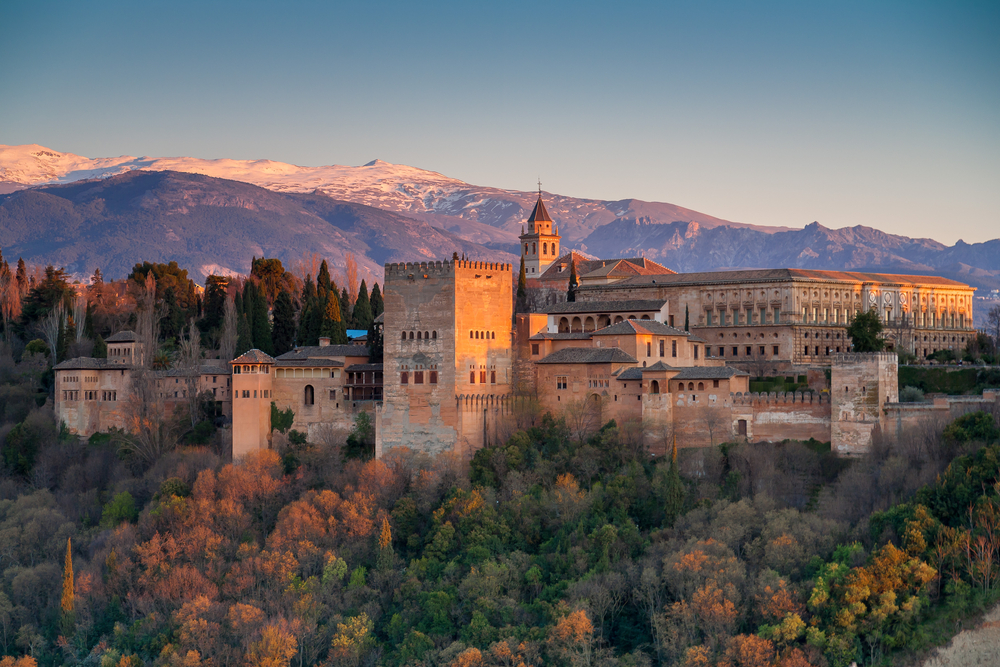 One of the best things, for me, about writing a trilogy set in Spain is the excuse it gives me to bury myself in Spanish history, culture and folklore. Of all the countries I have travelled to (and there is quite a list), Spain is in my top three favourites for its people, its passion and its vibrancy; and within its borders, one of my most loved places is the Alhambra in Granada.

Isn’t it beautiful? This complex of Moorish palaces has a fairytale feel right out of the Arabian Nights.

For many centuries, the Spanish have loved this site for its spectacular beauty and stirring magic. But it was not until the nineteenth century that the romanticism of the Alhambra was popularised through the West, thanks to the imagination and inspiration of one man: Washington Irving.

Irving (1783–1859) was a seminal figure in American literature. You may remember him best for his stories ‘Rip Van Winkle’ and ‘The Legend of Sleepy Hollow’, but he was also a well-respected biographer and historian. He wrote a series of works on Spanish subjects, inspired by his time in Spain as the US ambassador in the 1840s, including this work, of which I own a well-thumbed copy:

Irving had come to stay in Granada in order to research a book on the conquest of the city in the fifteenth century, and the officials of the city, who respected Irving professionally, permitted him to stay in the palace. Irving was so taken with the Alhambra that he was inspired to make copious notes. He did not initially feel they would amount to anything; ‘How unworthy is my scribbling of the place,’ he wrote.

But when Irving left the palace, it did not leave him, and he was compelled to share what he had experienced through his writing. He wrote The Alhambra: A Series of Tales and Sketches of the Moors and Spaniards, combining descriptions, legends and depictions of true events. In his preface he explained his desire to write something ‘that should have a dash of that Arabian spice which pervades everything in Spain’.

Take a glimpse at Irving’s account of his journey to the Alhambra and you will see how he has inspired so many to visit the palace, and to fall in love, as did I, with Andalucía.

In the wild passes of these mountains the sight of walled towns and villages, built like eagles’ nests among the cliffs, and surrounded by Moorish battlements, or of ruined watchtowers perched on lofty peaks, carries the mind back to the chivalric days of Christian and Moslem warfare, and to the romantic struggle for the conquest of Granada. In traversing these lofty sierras the traveller is often obliged to alight, and lead his horse up and down the steep and jagged ascents and descents, resembling the broken steps of a staircase.

Sometimes the road winds along dizzy precipices, without parapet to guard him from the gulfs below, and then will plunge down steep, and dark, and dangerous declivities. Sometimes it struggles through rugged barrancos, or ravines, worn by winter torrents, the obscure path of the contrabandista; while, ever and anon, the ominous cross, the monument of robbery and murder, erected on a mound of stones at some lonely part of the road, admonishes the traveller that he is among the haunts of banditti, perhaps at that very moment under the eye of some lurking bandolero. Sometimes, in winding through the narrow valleys, he is startled by a hoarse bellowing, and beholds above him on some green fold of the mountain a herd of fierce Andalusian bulls, destined for the combat of the arena. I have felt, if I may so express it, an agreeable horror in thus contemplating, near at hand, these terrific animals, clothed with tremendous strength, and ranging their native pastures in untamed wildness, strangers almost to the face of man: they know no one but the solitary herdsman who attends upon them, and even he at times dares not venture to approach them. The low bellowing of these bulls, and their menacing aspect as they look down from their rocky height, give additional wildness to the savage scenery.

I love Irving’s descriptions, but I adore his depictions of old legends associated with the palace, from the ‘Legend of Three Beautiful Princesses’ to ‘The Legend of the Enchanted Soldiers’. All of these are available to read at http://granadablog.net/tales_of_the_alhambra.

For generations since, Irving’s words have transported readers to Granada; these stories really do stand the test of time and perfectly encapsulate the life and colour of the palace and its environs. I have never read a book that made me want to visit a place more. Take, for example:

Everything here appears calculated to inspire kind and happy feelings, for everything is delicate and beautiful. The very light falls tenderly from above, through the lantern of a dome tinted and wrought as if by fairy hands.

One cannot help but yearn to be there! Indeed, the palace has long-since recognised the influence of Irving’s book and now makes it available in gift shops and has erected plaques in the very rooms in which the writer made his notes.

If you enjoy being transported to the Alhambra, I recommend also reading Philippa Gregory’s wonderful novel The Constant Princess (The Tudor Court series Book 1):

It’s a fictionalised account of the life of Catherine of Aragon (first wife of Henry VIII), whose childhood home was the Alhambra. Some really beautiful descriptions, and a fantastic story as well.