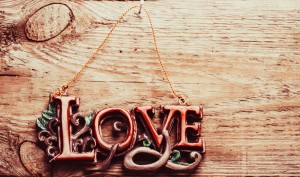 I grew up speaking French, predominantly – it was the language used at my school, for example. But because I lived in Egypt, it was essential I could speak Arabic. My parents insisted on my being fluent in English. And my half-French, half-Italian governess was careful to perfect my French while also weaving in a good knowledge of Italian. The result: I’ve always been aware of language.Perhaps, as a young girl, there were moments when I grumbled about learning so much – after all, reading (in French) or riding on my bike or playing with my friends was much more fun! But I grew into a deep passion for languages, and a fascination for them: the look of words on the page, the feel of them on the tongue, the sound of them on the ear. That interest in languages very much comes through in the books I write, none more so than The Echoes of Love.

When Ifirst visitedItaly, I was so swept away by the passion and romance of the setting that I knew one day I would set a love story there. And when I came to write The Echoes of Love, I found that as well as including aspects of the culture and the physical setting, using the language was essential for me in establishing what it means to be a young woman falling in love in Venice and Tuscany and Sardinia. Take the following extract:

When four o’clock came, Venetia headed back to San Marco’s square and met Francesca at their usual haunt, Fritelli. The café was teaming with Venetians, the way Venetia liked it because the rest of the year this beau monde retreated into their homes, taking refuge from the tourist stampede. Being surrounded by these elegant people, listening to their musical language, was essential to her because without it she felt she was missing out on a crucial element of life in Venice. To be in Venice without its citizens was to know the city’s stones but not its soul.

The language matters to my heroine, Venetia – it’s real, it’s what lies beneath the mask of Venice, what it may show to a tourist; and it matters to me as the writer.

Just a simple word – vaporetto, carnevale, trattoria– can convey so much of the place and the atmosphere than I could ever describe in English. Italian is so beautiful; how can one write a beautiful love story set there without paying homage to its language?

Of course, I write in English, and I can’t expect my English-speaking readers to know Italian, so I looked to find ways to weave in the language of Italy. A word here and there, in description, sets the scene, and often so much more eloquently than the English term: caffeteria and palazzo, for example, are so much prettier than café and squares, and il Conteis to my ear more dramatic and romantic than ‘the Count’.

But where the Italian comes through most is in the dialogue, where I incorporate just enough to remind the reader that they’re in Italy. Both Venetia and Paolo, speak Italian. At their first meeting Paolo comments on Venetia’s fluency, saying ‘You’re not Italian?  You speak Italian like a native?’ and Venetia explains that her Venetian godmother insisted she learn the language. Thus, with both characters able to converse in both English and Italian, I was able to use both languages for their conversations. For example:

Then, of course, there are the terms of endearment, like cara and amore mio and carina and tesoromio that flow from Paolo’s lips when he is with Venetia. I love the sound of such words; they are so onomatopoeic.

Italian is one of the Romance languages (along with Spanish, Portuguese, French and Romanian). In this sense, Romance simply defines them as a group of languages derived from Vulgar Latin, that used by the lower classes of the Roman Empire (as opposed to Classical Latin, spoken and written by the upper classes). But I would argue that these languages are also supremely romantic in the modern sense. I loved incorporating Italian in The Echoes of Love, and I’m very much enjoying weaving in another evocative language, Spanish, to my latest work – details to follow soon!