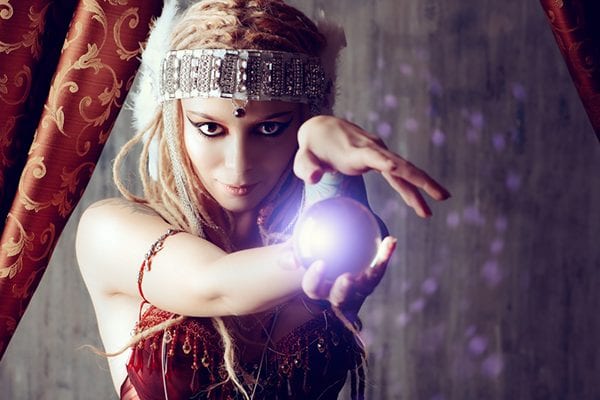 A common theme in my writing is fortune telling. In Burning Embers, a witch doctor warns Coral of what is to come; in The Echoes of Love, a Chinese wise man offers Venetia advice on where her path will take her; in Indiscretion, an old gypsy, Paquita, thrusts her predictions for the future upon Alexandra. In Masquerade, my new novel, Paquita has become an eerie character about which Luz’s parents will not talk, for they know there is darkness – and also truth – in her words. Paquita tells Luz:

‘You want to know your bahi, your fortune? I will tell you. I have seen the simachi, the sign in the full moon… Gemini! You’re looking for Gemini! He is your sustiri, your fate. Many men covet you, but your bahi lies with him of the moreno, dark skin and the lion’s eyes, eyes as green and deep as African forests. A gypsy hidalgo de la maspuraratí, of the purest descent. Do not try to avoid your destiny or the curse will come upon you. I tell you, I have seen the sign in the full moon this month. Every word I speak is true.’

Luz is deeply uneasy at the gypsy’s words, but is determined to dismiss them: ‘This was just gypsy nonsense,’ she tells herself,‘with the sole intention of intimidating her.’ Luz’s reaction is similar to my other heroine’s initially, and yet, by the end of my books, the heroines – and the readers – have cause to question the path of taking a wholly logical, dismissive stance to the notion of destiny.

Where does this theme come from? It is a personal influence that I bring to the writing. I have long been fascinated by fortune telling.When I was a young woman I visited plenty of fortune tellers and became quite persuaded that some people really do have the gift to see into the past and the future. My experiences set me on a path to finding out about divination across various cultures.

Fortunetelling can be traced back in history to ancient civilisations, but it became most credible to people during the 15th and 16th centuries as part of the Renaissance humanism. It began with the Romani people, and was embraced by some Eastern cultures too, but was traditionally frowned on by the major religions.

The list of means by which fortune tellers see the future is long and fascinating. Common methods include telling fortunes by ‘reading’ celestial bodies (astrology), cards (cartomancy), crystal balls (scrying/crystallomancy), palms (palmistry), runes (rune casting) and tea leaves (tasseomancy). Over history, several methods have focused on animals, from augury which focuses on the flight of birds to alectromancy, in which the fortune teller is informed by how a rooster pecks grain. I have always found pyromancy wonderfully evocative; imagine telling the future by staring into flames.

Including fortune telling in my books allows me to build on three key themes:

And what of the fortune teller, of the person who carries the burden of knowing what is to come? They are often the minor character, the antagonist, somewhat ghoulish perhaps. But my romantic mind can conjure up a story for each, a past riddled with pain. I will leave you with a beautiful poem by Syrian poet Nizar Qabbani that so perfectly encapsulates the emotion of the fortune teller.

She sat with fear in her eyes

She said ‘Do not be sad, my son

You are destined to fall in love’

My son, Who sacrifices himself for his beloved,

For long have I studied fortune-telling

But never have I read a cup similar to yours

For long have I studied fortune-telling

But never have I seen sorrows similar to yours

You are predestined to sail forever

Sail-less, on the sea of love

Your life is forever destined

To be a book of tears

Between water and fire

But despite all its pains,

That is with us day and night

It is love, my son

That will be forever the best of fates

There is a woman in your life, my son

Her eyes are so beautiful

Her mouth and her laughter

Are full of roses and melodies

And her gypsy and crazy love of life

The woman you love

May be your whole world

But your sky will be rain-filled

Your road blocked, blocked, my son

Your beloved, my son, is sleeping

In a guarded palace

He who approaches her garden wall

Who enters her room

And who proposes to her

Or tries to unite her plaits

Will cause her to be lost, my son…lost

You will seek her everywhere, my son

You will ask the waves of the sea about her

You will ask the shores of the seas

You will travel the oceans

And at the close of your life

You will find that since your beloved

Has no land, no home, no address

You have been pursuing only a trace of smoke

How difficult it is, my son

To love a woman

Who has neither land, nor home.