Museum, for me, is another word for sanctuary, paradise. I suppose, growing up in Alexandria, Egypt – home of the original Musaeum (‘Institution of the Muses’), founded in the third century BC – it is inherent in me to have a fascination with these places. Over the years I have lived in Britain, it has been such a pleasure to explore its museums. Here are some of my favourites.

The British Museum has one of the largest permanent collections in the world, totalling some fourteen million artefacts relating to the history and culture of humanity spanning two million years. When it opened in 1753, it was the first national and public museum in the world.

Of immense interest to me is the Egyptian collection, which is the largest in the world outside the Egyptian Museum in Cairo; indeed, it’s so big that only four per cent of the collection is on show at the museum at any one time. Alongside the statues and mummies, probably the most famous item is the Rosetta Stone, dating to 196 BC, which allowed experts to decipher Egyptian hieroglyphs.

Other must-see antiquities at the museum include the Parthenon Marbles, a collection of sculptures from the temple of the Parthenon on the Athenian Acropolis; the Hoa Hakananai’a, an Easter Island statue; the bronze Ife head, depicting the leader of the West African Kingdom of Ife; and the ivory Lewis Chessmen, discovered on the island of Lewis in Scotland and dating back to the 12th century.

The Ashmolean Museum of Art and Archaeology was the world’s first university museum. It opened in the 1600s, to house the ‘cabinet of curiosities’ of Elias Ashmole, and moved to the present building in the 1840s.

The collection, which you can view online, spans 112,500 artefacts, and includes a violin made by Antonio Stradivari; the ceremonial dress of Lawrence of Arabia; Oliver Cromwell’s death mask; Oxyrhynchus Papyri, including biblical manuscripts; and many precious artworks, including ones by Michelangelo, Raphael, Leonardo da Vinci, Pablo Picasso, Paul Cézanne, John Constable and Titian. 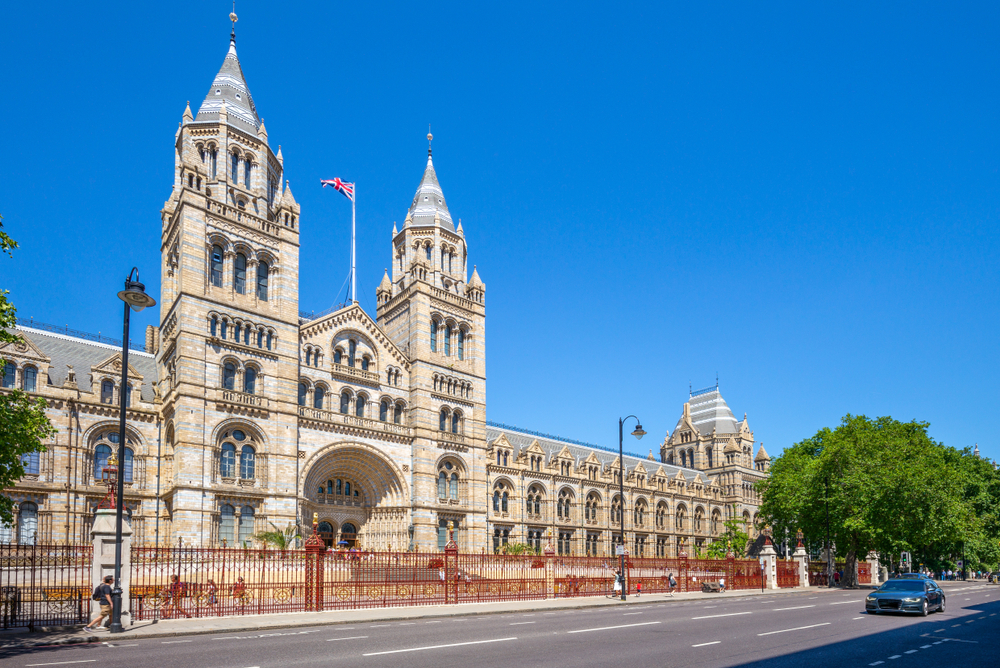 I will never forget the first time I entered this museum, into the massive cathedral-esque hall dominated by Dippy, the Diplodocus skeleton cast that was donated to the museum in 1905 and remained in this hall for the next 112 years. I was so awed, and to this day I feel the same way when I visit, though Dippy has now been replaced by Hope, a blue whale skeleton.

The Natural History Museum has 80 million items relating to the natural world. Many flock here to see the dinosaur fossils, but there is so much more to see, like the 4.5-billion-year-old Imilac meteorite and the Ostro stone, a 9,381-carat topaz.

The Victoria and Albert Museum

This museum, the largest in the world devoted to art and design, was founded in 1852 and named in honour of Queen Victoria and Prince Albert. At the opening ceremony Queen Victoria said, ‘I trust that it will remain for ages a Monument of discerning Liberality and a Source of Refinement and Progress.’ And so it has.

It is very hard to pick highlights for this museum, because there are so many important and fabulous artefacts, but here are just a few: ‘The Three Graces’ sculpture by Antonio Canova; the cast of Michelangelo’s ‘David’; the Ardabil Carpet from Iran – the world’s oldest dated carpet; the earliest known photograph of London (circa 1839); and the unicorn tapestry (dating to sixteenth-century Flanders). The V&A’s most famous piece is quite an odd one: ‘Tipu’s Tiger’, 1793. This large automaton, created for the Tipu Sultan, depicts a European man being mauled by a tiger.

Other wonderful museums I have visited in London include the V&A Museum of Childhood – so much nostalgia in their toy collection; the Science Museum, which is fantastically interactive; and the Imperial War Museum – sobering and humbling. The National Railway Museum in York is a delight, especially for children, and the Roman Baths in the city of Bath are fascinating. I also highly recommend the museums of Liverpool and Manchester, and those of Edinburgh and Glasgow. Some of these museums are as notable for their architecture as their collections; the Kelvingrove Art Gallery & Museum is especially beautiful, and the John Ryland’s Library is breathtaking and will look rather familiar to those who love the Hogwarts castle from the Harry Potter films.

All of these museums are well worth a visit, if you are able to do so someday, but equally you can learn much from their websites.