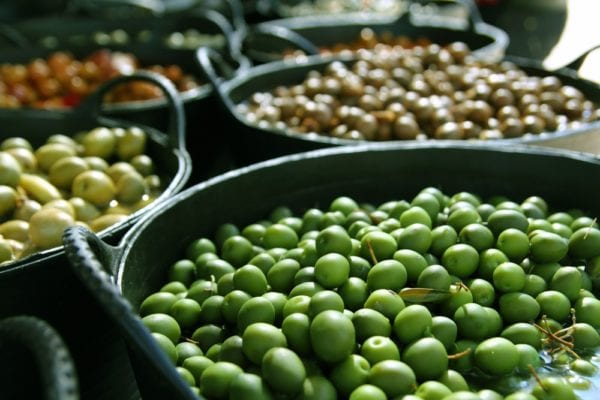 Often, my fiction is inspired by experiences in my own life, but occasionally the reverse can be true: my fiction can inspire me to try something new. That has been the case in the past few weeks, and it has been a rewarding experience indeed.

My upcoming novel Aphrodite’s Tears is set on the Greek island of Helios in the Ionian Sea, which is privately owned by the Theodorakis family. The head of the family, Damian, is responsible for all the people who live on the island, and a major source of income for them all is the Theodorakis Press, which takes the olives that are grown on the island and turns them into olive oil that is sold to mainland Greece and Italy.

A chapter of the book is devoted to Damian taking the heroine, Oriel, to his olive press and educating her on the business. Here is a peek of the setting, Damien’s ‘olive heaven’, through Oriel’s eyes:

They had driven up to a building that looked like an old Roman monastery, its domed tower presiding over thick stone walls of pale pinkish ochre, and its different sections covered with tiled, pitched roofs. It was a strange and beautiful place. Surrounding the building, row after row of noble olive trees surged up from a parched, rocky, calcareous soil, gnarled in the calm stillness, their silvery-green leaves shimmering against the bright Greek sky in the sun-drenched afternoon.

As they tour the press, Damien explains the process to Oriel.

First, he shows her the traditional stone mill – the likes of which have been in operation for thousands of years. The olives are placed on a conveyer belt, which runs them through a stream of water to clean them, before tipping them into the grinding mill. There, great millstones laboriously rotate, grinding the whole olives into a brown, gluey pulp. Eventually, bright beads of extra virgin oil began to appear along the edges of the pulp, and as the pressure is increased, they become a golden stream of oil that glitters like liquid gold.

Then Damien shows Oriel a more modern way of making olive oil, which the Italians call affioramento (afloat). The pulp is mixed with water and put into large containers and then left, until the oil naturally separates, floating to the top. This process takes a lot longer, but yields a more delicate – and therefore valuable – oil.

Why use two different olive-oil production methods on the island? Because Damian is a man with one foot in the past, in tradition, and one in the future, in progress. The traditional olive press has been in his family for generations, and he and the islanders see it as a precious and artisan craft. But with the responsibility for his people sitting weightily on his shoulders, Damian must also make sure that this little isolated island is connected to the modern world and able to be self-sufficient, and thus he also employs the modern method  in order to create products that yield a good profit.

I found it fascinating to research for this novel how olives are harvested and processed for oil, not least because in the garden of my French home I have an olive grove of my own. After writing Aphrodite’s Tears, the idea struck me: why not try to harvest my olives? Here is the culmination of that idea…

I can’t tell you how wonderful it was to harvest my own olives! I had a rather romanticised notion of picking the olives from the branches by hand, but soon realised that was not feasible, and so I had a little help from a gardener, who used a vibrating tool to shake the olives off the branches and onto nets spread under the trees (see the video).

Altogether, more than 200 kilos of olives were collected, and I had these sent to an olive press, which means I will have my very own olive oil for Christmastime. I hope it will be as delicious as that made by the Theodorakis Press which sparked the idea. I expect it will, for I feel sure that Demeter, Greek goddess of the harvest, was smiling on me as I gathered my olives.