I love music, and I love films in which music plays an integral role.

Have you seen Legend of 1900? If not, I wholeheartedly recommend you do so (I understand it’s available in DVD format for a very reasonable price online). This is a life-affirming, heart-warming, touching tale told with reverence, a really romantic and magical film. One to watch when you have the house to yourself one evening, curled up with a hot chocolate or a glass of wine.

Legend of 1900 has a beautiful, award-winning soundtrack – especially if you like jazz, as I do. The film, set in the early 20th century, follows the story of an orphan, called 1900, who has grown up aboard a ship. It soon becomes clear he has musical ability in abundance, and his piano playing, effortlessly tapping into the emerging jazz scene, draws widespread attention.  The film, made in 1998, stars Tim Roth at his absolute best and is inspired by a dramatic monologue written by Italian director, performer and writer Alessandro Baricco called La leggenda del pianista sull’oceano (The Legend of the Pianist on the Ocean). If you like the film, I also recommend Baricco’s writing. 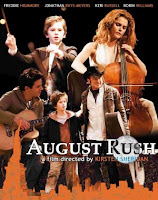 Another film that is similarly touching and feel-good is August Rush, a more recent film (2007) that focuses on another musical protégé, a young boy who has been separated from his mother and father. The music in the film is so moving (one to watch with the volume up high) and the ending, the climax of the film and the music, takes my breath away. It has such an affirming, positive ending, and the final words, ‘The music is all around us, all you have to do is listen’, echoed for me long after I watched the final credits.

Films like this are inspiration for me when writing. In a novel I always bring music in somewhere – in Burning Embers, the nightclub that Rafe owns is the scene for a sensual, atmospheric dance performance that really sets the mood.

I would like to tell you that I, too, can play the music I so admire. Sadly, though I took piano lessons for seven years as a child with an old Russian old lady who had been my mother’s teacher, I hated every minute of it. I am a writer at heart.