In my new novel, Indiscretion, the heroine is a writer. So what better place for an intimate lunch between Alexandra and her estranged father than Hazlitt’s, I thought: the eighteenth-century hotel just off Piccadilly that has been a favourite haunt for writers over the years since it was home to William Hazlitt: think antique books and oak paneling and candlelight. 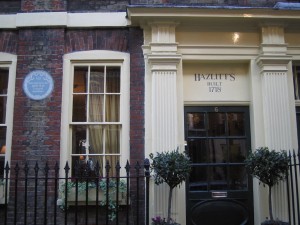 I so enjoyed my visit to Hazlitt’s while researching Indiscretionthat I decided to dig a little deeper and uncover some other hotels of literary interest in the capital: ideal retreats for bookworms, whether for afternoon tea or a glass of wine, or perhaps, if you’re treating yourself, a night away.

The Savoy has a long tradition of hosting literary events, and it was the first luxury hotel to have a writer-in-residence. Geoffrey Chaucer, Henry Fielding, Michael Morpurgo and Fay Weldon have taken up the post, and Stephen Fry was for a time blogger-in-residence. 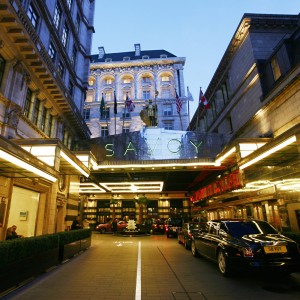 Sit in the lounge of The Langham and you’re surrounded by the ghosts of writers past who once stayed and wrote there: Mark Twain, Oscar Wilde, Winston Churchill, Noel Coward and especially Sir Arthur Conan Doyle, who set Sherlock Holmes stories at the hotel. 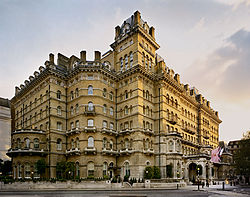 Location for the Foyles Literary Luncheons, which began in 1930, devised by Christina Foyle as a way to connect readers and authors; since then Foyles has held more than 700 luncheons with more than 1,000 authors entertaining almost 500,000 guests! This hotel in Mayfair also serves a wonderful afternoon tea, if you like the occasion. 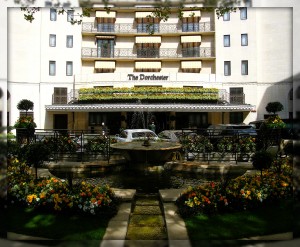 If a literary break appeals, but remaining within the confines of London does not, take a look at the offering of Brown’s Hotel, London, where Rudyard Kipling wrote The Jungle Book. Brown’s Hotel’s Literary Town and Country Escape has an itinerary taking in London, Devon and Cornwall and some classics of English literature along the way. It’s pitched at people ‘who simply need some time to themselves in the company of a good book’. That’s all of us, then, surely! Sounds heavenly.

Alternatively, would you prefer a hotel break in accommodation inspired by literature? Further afield, you could stay in the Hôtel de Glace, Canada, themed on Jules Verne’s Journey to the Center of the Earth; at the Inn BoonsBoro, Maryland, dedicated to epic romance novels and opened by Nora Roberts; at the Sylvia Beach Hotel, Oregon, where you won’t find a television in your room, only books; the Library Hotel, New York, whose rooms are themed on sections of the the Dewey Decimal system; or the fairytale-themed Maison Moschino, Milan, where you can spend a night in the world of Alice in Wonderland or Little Red Riding Hood. It’s so wonderful to see books paid homage to in this way. ‘More!’ is my cry.