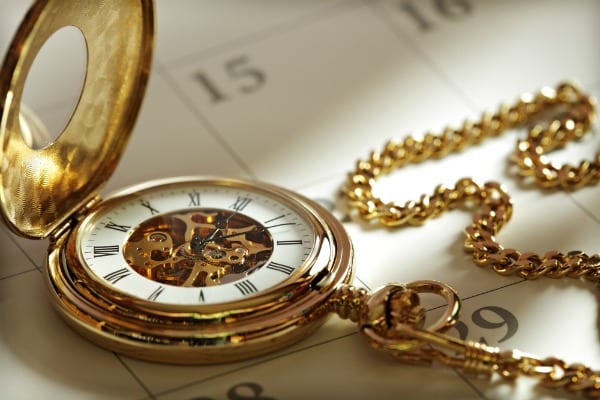 On this day in history, the Roman poet Virgil was born (19 BC), as was the German philosopher Friedrich Nietzsche (1844). Jean-François Pilâtre de Rozier made the first human ascent into the sky, in a hot-air balloon (1783); Queen Marie Antoinette of France was sentenced to death (1793); the first ever episode of I Love Lucy was aired (1951); and more than two million people protested across the US in The Moratorium to End the War in Vietnam (1969).

But what makes 15th October really interesting, I think, is that on this day in 1582 the Gregorian calendar was adopted in Roman Catholic nations – and as a consequence, time jumped forward by ten days.

The story of how the Julian calendar was deemed off track and the Gregorian calendar was devised as the better system is a complicated one involving astronomical observations of the placement of the sun, the moon and the earth at various times of the year. Based on their calculations, those who came up with the Gregorian calendar decided that an average year was 365.2425 days long (0.0075 days shorter than the Julian calendar), and that keeping the span of a year on track would be achieved through a leap year rule:

Pope Gregory XIII’s papal bull became law for the Catholic Church on this day in 1582. Much of Roman Catholic Europe and the Papal States adopted the new calendar on this day. For all the people in these places, that meant a shift occurred: they went to bed on Julian Thursday 4th October 1582, and they woke up on Gregorian Friday 15th October 1582. The days of the week continued in succession, but the 5th to the 14th of October simply disappeared!

It must have been strange, don’t you think, to have skipped forward in the calendar in this way. I find the clocks changing in the autumn and the summer disorientating enough; I can’t imagine how disorienting it would be to lose ten whole days. Did people feel out of step? Cheated, perhaps, of a little time? What if an important anniversary – a child’s first birthday, for example – fell in the missing period?

The writer in me ponders about these ‘lost’ days. One could imagine that between the first stroke of midnight and the last, the ten days sped by – time condensed into mere seconds; like something out of a story by HG Wells or Jules Verne.

To this day, most of the nations of the world follow the Gregorian calendar. Our calendar is something we take for granted, but could it change again in the future? Imagine if it needed adjustment again. Lost days – or even, perhaps, additional days; the same day all over again. Now there’s another intriguing thought for a writer: the chance to live a day twice…

Losing a day or gaining a day: the overriding sense is that either way, time is valuable. ‘A man who dares to waste one hour of time has not discovered the value of life,’ wrote Charles Darwin. But then, it is worth knowing what truly is a waste and what is not. As Antoine de Saint-Exupéry put it in The Little Prince: ‘It is the time you have wasted for your rose that makes your rose so important.’

I’ve lost and gained days several times crossing the International Date Line, 180th Meridian, more or less depending on politics.
On Jan 1, 1995 The Republic of Kiribati, formerly the Gilbert Islands, moved the International Date Line to include its entire territory to the western side of it and prevent the country from remaining in two different days.
From: http://www.travelnotes.org/Travel/Eclipse99/millennium.htm