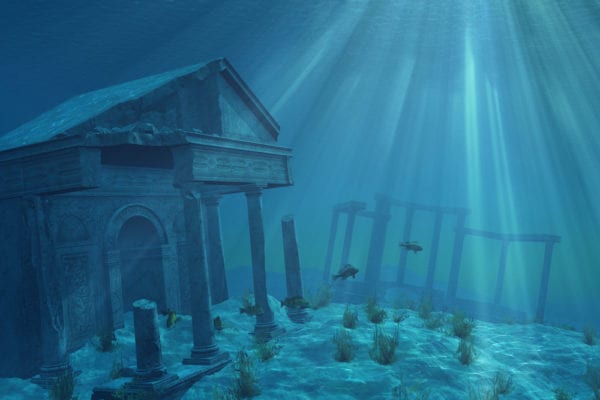 Recently, I was reflecting on a trip I took to the Greek island of Santorini, whose culture, history and mythology helped to inspire my new novel, Aphrodite’s Tears, which will be published in January.

Santorini is a volcanic island, and thousands of years ago it was the site of the Minoan eruption, which was incredibly destructive, wiping out settlements on the island and on neighbouring islands. One such settlement on Santorini was Akrotiri, which was buried in volcanic ash. Some historians believe that this eruption and the decimation of Akrotiri were the inspirations for a very famous story by the Ancient Greek philosopher Plato: that of an island that sinks into the sea and is lost. Its name, of course, is Atlantis.

The lost island – often known as the city of Atlantis – is a mysterious and compelling idea that has captured imaginations for many hundreds of years. Some ancient writers believed that Plato’s story was fact, not fiction; but these days there are few who see the tale as anything more than an allegory meant to serve as a lesson.

Still, Atlantis is not the only island/city believed to be lost. Are other stories to be believed?

Take, for example, the ghost island of San Borondon, the eighth of the Canary Islands. It is so called for Saint Brendan of Clonfert (484–577), an Irish monk who first set foot on the island. But then the ‘whale island’ began moving, and so the monk jumped into a boat and watched, astonished, as the island disappeared into the blue. Are you dubious? Of course, this is a legend, beloved by the Irish and the local Canarians alike. But one has to wonder: many sailors reported seeing the island through winds, rains and mists but found it had vanished as they approached, and in the 18th century an official investigation was made when 100 islanders on El Hierro claimed to have seen San Borondon.

San Borondon is just one of a list of more than 50 ‘phantom islands’ that have been logged, usually by sailors, over the years. All kinds of explanations have been given for these islands that have been sighted but cannot be located, from their having sunk into the sea following volcanic activity (in the style of Atlantis) to their having been misidentified icebergs. The Fata Morgana is my favourite explanation. It’s a kind of fast-changing mirage that you can see on the horizon (so named for Morgan le Fay, the enchantress of the legends of King Arthur, because sailors would say she conjured up mirages of land to lure them into dangerous waters).

What of the lost cities? Surely a city is harder to lose than a glimpse of an island through sea mists? If Atlantis had been in the middle of the Greek mainland, it would be far easier to rediscover – would it not?

Some cities termed ‘lost’ are not really lost; they simply exist now in known locations as ghost towns. But other cites truly did get lost, abandoned due to war or disease or natural disaster and their location not recorded on any map.

Take, for example, the Lost City of the Incas. Machu Picchu was built at the top of a mountain ridge in Peru in the 15th century and was abandoned (most likely due to a smallpox epidemic, it is thought). By the turn of the 20th century, only the native people who lived in the immediate area knew of its existence. So easily, it could have been dismissed as the stuff of legends. Yet today, the ruins of the rediscovered city attract visitors from all over the world.

An even more interesting example is that of Helike. This city in Greece disappeared in 373 BC, consumed by the sea. A story? Certainly, Helike inspired a tale told through the centuries that was rich in mythology: so the the story went, the sea god Poseidon had wiped out the city in vengeance, for the people of the city had enraged him. Until recently, many people assumed Helike was nothing more than legend. But the city did exist!

In 1988, the Helike Project was launched, headed by a Greek archaeologist, Dora Katsonopoulou, and a scientist, Steven Soter, of the American Museum of Natural History. It took many years, but eventually, in 2001, the lost city was discovered beneath an ancient lagoon. To this day, excavations are still underway to find as much as possible of Helike – and all thanks to the dedication of the archaeologists.

In my new book, Aphrodite’s Tears, the heroine Oriel is an archaeologist, passionate about uncovering artefacts and architecture of the past and preserving it for future generations. She is everything an archaeologist must be: tenacious, knowledgeable, careful, curious – but most of all, willing to believe.

It is so easy – too easy – to dismiss fantastic stories as fantasy. But sometimes long-forgotten truths are unearthed, and when they are, it is a lesson to us all: that we must be open-minded and enquiring; that we must respect stories handed down over generations; and that if we wish to make fantastic discoveries, we must dare to have faith in their existence.