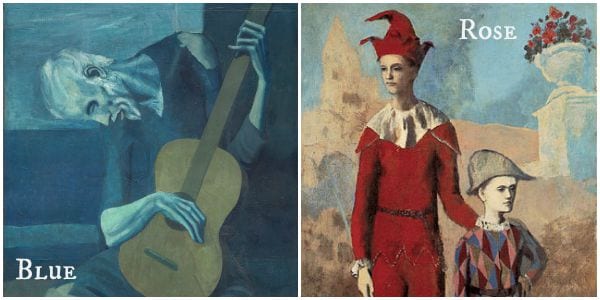 Pablo Picasso is generally regarded as one of the most important artists of the twentieth century. A painter, sculptor, printmaker, ceramicist, poet and playwright, he was instrumental in the development of various new artistic styles and the Cubist movement. He was an extremely prolific artist (he produces 1,885 paintings alone), and – unusually for many great artists – was very successful during his lifetime, amassing a fortune for his creative works.

His beginnings were not entirely humble;he was born into a middle class family in 1881 in Málaga, Andalucía (setting for Masquerade), the son of a painter and professor of art, and was baptised Pablo Diego José Francisco de Paula Juan Nepomuceno María de los Remedios Cipriano de la Santísima Trinidad Ruiz y Picasso (no wonder he shortened the name!). His mother would later say that Picasso’s first word was the Spanish for pencil. His passion for art emerged early in life, so much so that by the age of seven his father was tutoring him, having him study the masters; and by thirteen his father felt his son’s skill has surpassed his own. At fourteen, Picasso painted Portrait of Aunt Pepa, which prominent art critic Juan-Eduardo Cirlot dubbed ‘one of the greatest in the whole history of Spanish painting’.

After a brief stint at art school, Picasso forged his own path in the art world. He was a penniless artist in Paris and Madrid, burning his works to heat his small accommodations. During the 1900s, he passed through his Blue Period, in which paintings were sombre and in blue tones, and then the Rose Period (whose circus folk depictions are wonderful). Art historians believe the warming from blue to rose was down to Picasso finding love with fellow artist Fernande Olivier.

In the latter part of the 1900s, Picasso made some important connections, most notably with the American modernist writer Gertrude Stein, who collected art, and with Henri Matisse, who would be his friend and sometime rival. In 1907 his works went on display in a Parisian gallery owned by Daniel-Henry Kahnweiler, one of the most influential French art dealers of the century.

It is Picasso’s Analytic Cubist period for which he is more often remembered. He developed the style with Georges Braque. The artists analysed objects, breaking them down into geometric parts and reassembling them, allowing many viewpoints. Colour was not important – most of the works are monochromatic; what was important was shape. Picasso’s Cubism revolutionised art in the early twentieth century. It inspired Synthetic Cubism (collage), and informed the development of Orphism, Abstract art, Purism, Futurism, Suprematism, Dada and Constructivism.

‘Picasso changed his companions as often as he changed painting styles’ is an aspersion cast by critics. Certainly, he was a man given to strong passion, who fell in and out of love. During the war years he left Olivier, fell for a woman who died, had another affair and then married Olga Khokhlova, a ballerina. Together, they lived the high life and had a son, but Picasso soon strayed from the marriage and his seventeen-year-old mistress bore him a daughter. Over his entire life he married twice and had four children by three woman, plus kept a host of mistresses, all of whom were muses for his art.

In the 1930s, Picasso became affiliated with the Surrealist movement. His most famous work was created during this decade: entitled Guernica, it was a reaction to the German bombing of the town during the Spanish civil war. The horror depicted is deeply powerful; I recall seeing the work in a gallery and being quite distressed at the images conveyed. Which was the artist’s point: ‘The public who look at the picture must interpret the symbols as they understand them,’ he said. He was unafraid of the work’s meaning; famously, when he was living in Paris during the Second World War, a Gestapo agent searched his apartment and, pointing to the painting, demanded, ‘Did you do that?’ Picasso’s reply: ‘No, you did.’

Pablo Picasso died in 1973 in Mougins, France (his prolonged absence from Spain having kept him safe from Franco’s disapproval of his opposing political ideology). He had no will, and so the French state claimed death duties in the form of many works from Picasso’s private collection (his own and others’). These became the basis for the Musée Picasso. But Picasso was a Spanish artist by birth, and his homeland later reclaimed him: in 1963 Museu Picasso was opened in Barcelona, and in 2003 the Museo Picasso Málaga followed. (I have been to all the Picasso museums; they are well worth visiting if you get the chance.)

Since his death, Picasso’s work has been a legacy for all new artists, and has become highly sought after by collectors and galleries. In May of this year Women of Algiers sold at auction for 179.3 million dollars – the most ever paid for a painting.

Like many, I have found Picasso’s words as inspirational and important as his art. Few remember him as a poet, but he was: he wrote more than 300 poems. As a collector of quotations, I love many of his axioms. I will leave you with some of my absolute favourites, which inspire me every day as I write: